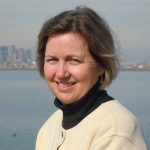 The BSA/SCUP Roundtable, founded in the late 1990s by Donna Denio and the Liviu Brill, AIA, is one of the BSA’s most successful committees if you measure success by the quality of program content and the number of people attending the programs.  From the beginning, the Roundtable has been a hybrid of two already successful organizations, the Boston Society of Architects (BSA), and the Society for College and University Planning (SCUP).

During the first years of operation, Roundtable programs were organized by a steering committee of six, three consultants and three representing local colleges or universities.   For the past several years we have initiated an open participatory program planning process.  Each August we issue an open invitation.  Anyone interested is invited to suggest program ideas.  During a brainstorming session we refine the list of ideas to five to six program concepts.  Anyone not able to attend the open planning meeting is encouraged to email ideas to either of the Roundtable co-chairs; Debi McDonald at DMcDonald@nbbj.com or Donna Denio at DDenio@campbell-mccabe.com .

An abundance of interesting program topics were generated during our 2014-2015 planning meeting held on August 21, 2014.  Suggested topics include trends in student housing, transforming computer labs to student support spaces, transforming spaces on a limited budget, understanding the needs of international students, the role of the university in revitalizing urban downtowns, developing campus safety and emergency response plans, and demystifying campus planning jargon.

On September 23rd, the BSA/SCUP Roundtable will host a program on the Emerging Trends in Campus Libraries.  The program will be held in the Forum Room of Lamont Library at Harvard University.  Registration will begin at 7:30 a.m.  RSVPs are required through the BSA (www.architects.org) calendar because Lamont Library security mandates that only pre-registered guests be admitted.  Sarah Thomas, Vice President for the Harvard Library, will present an overview of emerging trends at college libraries and recent developments at the Harvard Library System.

Returning to Harvard in August 2013 after serving as the Bodley Librarian (the Head Librarian at the University of Oxford), Sarah Thomas is widely published and been acknowledged by awards for excellence in library leadership.  Thomas is the first woman and first non-British citizen to hold the Bodley Librarian position.  Under Thomas’ leadership, the Bodleian Libraries were awarded the Queen’s Anniversary Prize for the excellence of their collections and their efforts to widen access to their historic collections.

We also encourage people to take advantage of early registration discounts at the SCUP North Atlantic Symposium that will be held at Stony Brook University at Stony Brook, New York, on October 24th.  The Early Bird Deadline ends on September 10th, 2014.  The Symposium: Building Excellence from the Ground Up: Stony Brook’s First Fifty Years will explore opportunities and challenges associated with maintaining a research university for the coming decades.