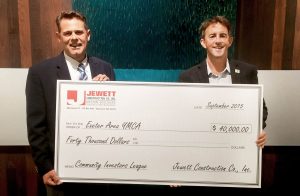 This is just the latest in Jewett’s longstanding tradition of supporting community nonprofits — a history that includes everything from fundraising and donating labor, to sponsoring events.

“Giving back is a big part of our corporate culture,” says Craig Jewett, the firm’s president. “The Exeter Area YMCA project was a stellar example of an entire community pulling together to get a job done — one that will serve the community well for many years to come. Our donation was a natural outgrowth of that group energy and enthusiasm.”

Other non-profits include functioning as part of the fundraising arm of the annual CHaD All-Star Football Game benefiting critical programs at the Children’s Hospital at Dartmouth-Hitchcock—the state’s only comprehensive children’s hospital and pediatric trauma center. The firm also lends support to the Daniel Webster Council, Boy Scouts of America, heading up the Jewett Golf Classic to benefit for the BSA for a number of years, as well as donating labor to assemble the track for this year’s Pinewood Derby—at one half mile, the longest ever assembled—as part of the BSA’s 2015 New Hampshire State Jamboree.

Jewett employees also provided the skilled labor for renovations to YMCA Camp Lincoln in Kingston, NH and regularly participate in the annual “March for Babies” sponsored by the March of Dimes. Members of Team Jewett are also regular fixtures on area nonprofit boards and Chambers of Commerce in the towns in which they live.