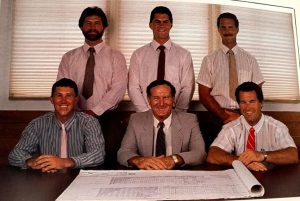 Jack was born and raised in Randolph,  by his parents, John and Ruth, alongside his siblings, Betty, Maureen, Joseph, William, Candy, and Russell. Jack and Marie Callahan had five sons, John, Michael, Stephen, Timothy, and Patrick. In addition to his quick wit and humor, Jack was known for his athletic abilities as a three-sport athlete and having played minor league baseball for the New York Giants. Jack was thought by many to have been Randolph’s greatest all-around athlete of his era. His love of sports was only ever surpassed by his love of family.

“If we weren’t going to work the weekends, he’d fire us on Friday and hire us back on Monday” (Stephen Callahan)

“If dad came onto the jobsite and asked you what you were doing, you better not say ‘nothing’. His comment would be ‘make a decision, doing something wrong is better than doing nothing!’” (Tim Callahan)

“I often played golf with dad on the weekends and use to joke about how old his clubs were. I offered to buy him a new set but he wouldn’t hear of it. So being the frugal guy he was, the next weekend he showed up to play and had painted his clubs gold including his one iron which he said only he and God could hit.” (John Callahan III)

“Dad had a larger than life personality. He was always the biggest guy in the room. He had a knack for bringing out the best in people.” (Mike Callahan)

“All of my favorite memories of Papa include spending time with him at John’s Pond better known to us as ‘Papa’s Pond’ and having him in the stands at all my ice hockey games. Papa was always the life of the party and wanted to make people laugh, I remember one Summer we were over on Martha’s Vineyard and all of us were jumping off the State Beach Bridge so Papa decided he was going to join us. He jumped off with his toupee in place – HA!” (Shay Callahan)

“One of the best memories I have of my grandfather was my first spring break in college. My dad said my friends and I could go down to Florida and stay with my grandfather for a few days. Not only did he know exactly where to take us, but we watched as he went to the front of every bar line and slipped the door guy $10 to let us all in and somehow it worked every single time. He was the life of our college spring break. I don’t think any of us will ever forget the nonstop laughter on spring break with the legend himself ‘Action Jackson’.” (Diana Callahan)

“When I think of Papa, the first thing that comes to mind is how many funny one-liners he had, that I’m not going to write in an email because nobody could deliver them like Big Jack. I’m thankful for every minute we spent together, from the office at Pleasant Street, to trips on the 19th hole, my H.S/ college games, cousins’ games, golf trips to FL, weekly lunch’s at the office, and basically every time I was with him. No matter the event he just made you happy. There is no
replacement.” (Jim Callahan)

You made our world all it is, you gave the world all you had, and you left the world with grace and class. Our commitment to you is that we will aspire to have a fraction of the impact you did, and we know we have your help from above. (Steve Callahan Jr. on behalf of the entire 3rd and 4th generations)

The family jokes that Jack may have experienced an awkward exchange at the pearly gates, as he had often joked that he was a better carpenter than Jesus Christ.

An active member of his community, Jack was involved in the local school committee, the Rotary Club, Knights of Columbus, Elks Club, and the 100 Club. He also enjoyed boating and travel. Jack obtained his private pilot’s license and regularly flew his own plane. He loved to fly to his kids and grandkids sporting events. His continued love for baseball led him to found the North Randolph Little League.

Jack and Marie established John T. Callahan & Sons, Inc. in 1954 and eventually all five boys came into the family business after college. The company was founded on the principle that honesty, service, and care for customers would establish a successful company. Over the next 25 years the company grew steadily, servicing notable clients across the East Coast including Sears, Dunkin Donuts, Burger King, and Howard Johnson’s. Today that legacy lives on in what has evolved into the three successful family business entities, Callahan Construction Managers, Global Property Development Corp, and JTC III Development Corp.

“Much like following the kids in sports, he was especially proud of the businesses’ success and their dedication to a job well done and a happy client”, remembers Tim Callahan.

“Our father taught us the keys to a successful business are strong relationships, excellence in service and community commitment,” said Pat Callahan, Jack Callahan’s youngest son, and current president of Callahan Inc. “My brothers and I look forward to continuing his legacy. Dad taught us that family extends beyond blood, and we have taken his approach into how we work with and treat our loyal staff across all of the Callahan Companies.”

Due to the inability to hold a public memorial service, and in honoring Jack Callahan’s commitment to first responders, the family is requesting that in lieu of flowers, donations are made in Jack Callahan’s memory to the Massachusetts COVID-19 Relief Fund to buy much needed supplies for our doctors and nurses on the front lines of the pandemic. The Callahan family is extremely grateful to all those who are providing much-needed services during this time of crisis.