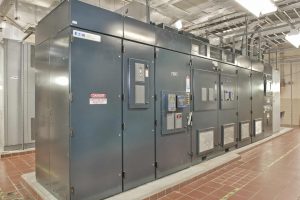 Boston – J.F. White Contracting’s electrical division, based in Framingham, is on schedule with the Deer Island North Main Pump Station Variable Frequency Drive and Motor Replacement project. The NECA contractor is serving as both general contractor and prime electrical contractor in the elaborate five-year project, which is valued at just over $24 million.

The project, which commenced in November 2011, entails the replacement of 10 3,500hp/4,160V pump motors and corresponding smart variable frequency drives (VFDs), that will pump raw wastewater from incoming sewer lines located 140 feet beneath the building through the plant for treatment and purification. J.F. White is currently working on the seventh of 10 new motor/VFD replacement combinations.

Prior to commencing work on any VFD/motor combination, approval of a comprehensive, detailed, equipment lift/rigging plan was required. 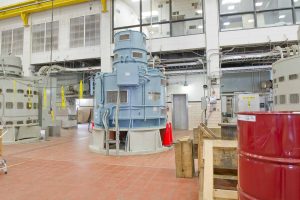 The scope includes the installation and integration of the most advanced smart VFD technology with the facility’s existing 20-year old control systems and wiring. The new motor and drive hardware and software components feature technology that will result in more reliable and energy-efficient pump station operation.

Fellow NECA Boston Chapter firms, Chapman Construction Group and Richard W. Reid Electrical, are working as subcontractors to J.F. White in the project; each contractor will replace one motor/drive set.

The project is on schedule for completion in March 2016.

Reliability testing procedures prior to commissioning all aspects of the project require J.F. White’s close coordination with motor and drive

Extensive start-up and commissioning procedures are integral to the project. Prior to acceptance by Deer Island and commissioning, each VFD/Motor combination must complete a 48-hour Integrated System Field Test (ISFT) to assure 100% reliability. The equipment must then pass a 10-day Operational Availability Demonstration (OAD), involving both the systems’ hardware and software.  During the OAD, the equipment must exhibit 99.7% availability for pumping operations, and have no system failures.

To ensure continuous wastewater pumping operations at the Deer Island facility, only one motor and VFD combination can be worked on at a time. Existing VFD / motor combinations are kept operational until commissioning of a complete new set.

After installation of each set, J.F. White is providing decommissioning and removal of each old VFD and motor set.

The team is managing a field crew of IBEW Local 103 journeymen electricians in the multi-year project.