Boston – Interstate Electrical Services (IESC) is recognizing four of its outstanding employees in honor of Women in Construction month. 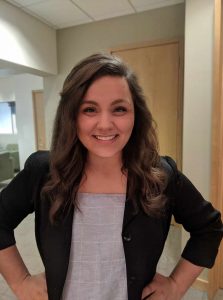 Morgan Doherty is the marketing coordinator at IESC. She has been with the company for almost two years, having started out as an administrative assistant and quickly working her way up from within.

Doherty appreciates the passion and drive of her coworkers, and that the leadership team at Interstate “harbors an environment that drives you to learn more.”

As part of the marketing team, she loves that the job “urges me to dive into the deep end of my creative side to connect with people. There are few things I have found to be more fulfilling than fostering relations built on understanding and service.”

She is optimistic that “the construction industry is changing,” and that we’ll continue to see more women and minorities entering the trades. “A smart company knows that when it harnesses inclusivity, it is not only building itself into a better resource to reach its customers but widening its talent pool. You owe it to yourself to try new things, you must be brave. It might feel daunting, and you might feel uncertain, but do not doubt that you belong everywhere you go.” 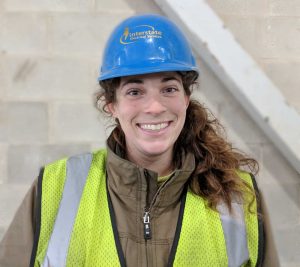 Kelly Gallagher is a first-year apprentice at Interstate Electrical Services, who couldn’t find the right field of study that was a fit for her. Five majors and two colleges later, she decided to take a break from studies and worked in retail for a few years. Looking for something more fulfilling, she embarked on a one-year electrical trade training program, and knew she had found her calling. “For the first time in my life, I did really well in school and knew I’d found my place.”

Gallagher is now five months into the electrical apprenticeship program at Interstate and is enjoying every minute of it. “It’s a lot of fun. Everything is so new to me and there’s a lot to learn and I love soaking it all in. I never know exactly what the day has in store, so every day is an adventure.” She is working towards getting a journeyman license and potentially her master license after that.

Gallagher points out that it might never occur to women like her to enter the electrical trade. “In high school, some of my best friends were guys who were doing the electrical program at their vocational school. It never occured to me that that could be a potential career for me. I don’t think electrician is presented as an option to many women. But they should absolutely go for it!” 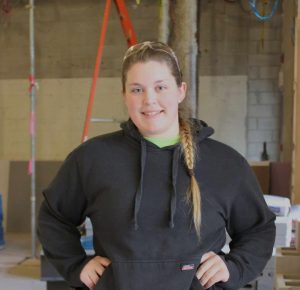 Allisyn Mowrey is an electrical apprentice at Interstate Electrical Services, having been in the apprenticeship program for almost a year. She originally intended to go into the dental field, but at the suggestion of a friend, took an exploratory course in electrical that changed her mind. She was fascinated by “the whole concept of understanding how electricity worked,” and the thought that she’d be able to wire her own house one day.

Mowrey finds fulfillment in the feeling of an honest day’s work — that she can begin her day with a project in mind and then “at the end of the day I’ve finished my task and then some.” Her approach? Don’t sweat the small stuff and focus on the big picture. “You can’t let the small stuff get to you — you have to be able to let things go.”

Are women put off by the gender imbalance in the construction trades? She thinks so, but encourages anyone interested to pursue the electrical trade. “Definitely do it! It’s a great opportunity to learn so much.” 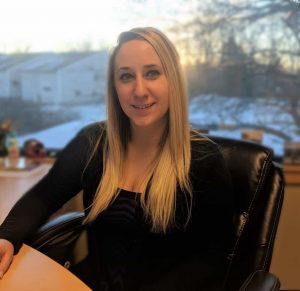 Tiffany Stanewicz is an assistant electrical designer at Interstate Electrical Services and has been with the company for three-and-a-half years. Previously in the medical field, she was introduced to the electrical trade by her then-boyfriend (now husband), an electrician who is passionate about the field. She was immediately intrigued by the industry. “The electrical trade provided me an opportunity to create and to build not only on projects but also on myself. Every project seems to bring new interesting challenges. I get to collaborate with an amazing team to overcome obstacles and bumps in the road as they arise all while building a lifelong meaningful career.”

Stanewicz values the collaboration necessitated by the electrical trade and especially Interstate’s team-centric approach, where she gets to interact with a number of different departments, noting, “I get to assist with layouts of electrical devices, communications, and fire alarm. I also get to generate project light fixture schedules, generate photometric analysis models and calculations with various of software.” The most rewarding part? Seeing her completed projects “come alive.”

As for encouraging other women to enter the trades, she says there’s “never been a better time for women to defy gender norms and embrace their value as a skilled trade worker.” It’s an exciting field that women have historically overlooked, but if more women “had the opportunity to explore it they may fall in love with it.”