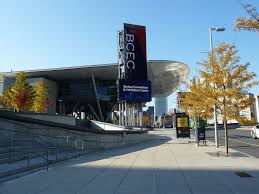 Westborough, MA – Massachusetts Convention Center Authority Executive Director David Gibbons recently announced to MassEcon members that the Omni hotel now under construction, with 1,050 rooms, will get the Boston Convention & Exhibition Center (BCEC) “past the tipping point” toward the estimated 3,500 nearby hotel rooms that were forecast as needed when the convention facility was planned in the 1990s. The new hotel is scheduled to open in 2021.

According to Gibbons, about 2,000 rooms had been built toward that goal, but many of them were limited service hotels. Having enough hotel rooms within a nearby walk of the exhibition space is critical to the success of the venue.

Gibbons said the recent annual impact of the Massachusetts Convention Center Authority amounts to a total of $775 million in economic activity, 336 events, 665,965 hotel room nights, and 732,587 attendees. The authority spends $115 million a year for operations and has 300 direct employees. It owns three facilities: the BCEC, the Hynes Memorial Convention Center in the Back Bay, and the MassMutual Center in Springfield.

“Our financial performance gives comfort to people on the Hill that we know what we’re doing and we’re not out wasting money,” Gibbons said. He addressed a breakfast meeting of MassEcon, which is celebrating its 25th anniversary this year as it works with public and private sectors to assist companies in locating or expanding in Massachusetts.