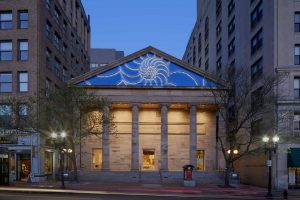 Waltham, MA – When Delphi Construction of Waltham was awarded the project for the renovation of the Cathedral Church of St. Paul in Boston, they expected to encounter the typical array of challenges that come with construction on historic buildings like the 200-year-old church on which they were about to begin work. But no one anticipated what lay underneath the main floor in the nave of the landmark structure located on Tremont Street, directly across from the Boston Common.

While removing existing floor tiles, Delphi’s crews noticed widespread cracking underneath. Further exploratory demolition revealed an antiquated flooring system of unknown origin and uncertain structural function. Its discovery brought construction to a halt while experts attempted to ascertain the nature and purpose of the archaic system. 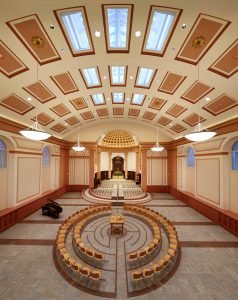 Joe Mastromatteo, vice president of Delphi Construction, was closely involved with the historically sensitive restoration and renovation project and recounted the story of the mysterious discovery.

“The original plan for that portion of work in the nave was to install a radiant heating system covered by a lightweight Gypcrete underlayment for the new stone tiles, which were to be laid out in a beautiful, elaborate labyrinth pattern. But once the pews and old tiles were taken out we noticed significant cracking throughout the slab underneath. We made some openings in the ceiling of the space below to investigate the cause and severity of the problem in the floor above. When we got a look inside, we saw something none of us had ever seen before,” Mastromatteo said.

The structural component of the floor consisted of a vast network of slabs, each one seemingly constructed around tightly spaced steel ribs resembling upside-down letter “u”s with corrugated sides, flanges, and integrated lathing. This system had similarities in shape to the more commonly used joist pan construction but lacked the gauge, reinforcement embedment, and uniformity of thickness typically encountered with that product. 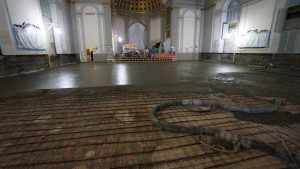 Even with his 20+ years of construction management experience, much of it dealing with older buildings, neither Mastromatteo, any of his seasoned staff, nor the dozens of subcontractors on site that day, had ever seen a system like this one, and none could demonstrate its functional capacity.

In the interest of safety, Mastromatteo called a halt to construction.

“That is not a call that any construction executive wants to make on a multimillion-dollar project, but until we could get answers to these questions, we could not move ahead with the rest of the project and just hope everything was okay,” Mastromatteo said. 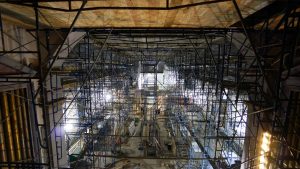 Over the next several weeks, a series of experts were brought in to inspect the system. While none could pinpoint its exact provenance, comprehensive engineering tests and analysis were performed on every aspect of the system, and it was deemed sound and sufficient. With Mastromatteo satisfied and a structural modification design in place, construction recommenced, and a new, continuous pour, structural slab was installed to receive the stone labyrinth. It utilized a special mix design never before used in the Northeast to minimize potential shrinkage, as the design could not incorporate a typical expansion joint approach.

“Of course it was a relief to resolve the issue, but it had significant ripple effects. We were not only working on the floor in the nave, but its massive coffered ceiling as well. We had planned on using scissor lifts to reach the 45-ft.- high ceilings to install skylights, undertake plaster and gold leaf repairs, along with ceiling painting required throughout. Even with the green light given, there remained concern over the point loading of scissor lift equipment, so we changed directions and went with scaffolding instead,” Mastromatteo said. 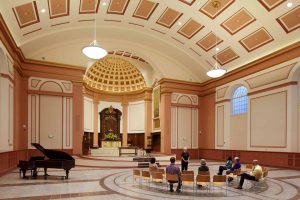 This change resulted in coverage of nearly 300,000 cubic feet with scaffolding, the surface of which the project team jokingly referred to as “the dance floor.”

The project involved other complex preservation and renovation work, plus a substantial new construction component and MEP upgrades, including the construction of a 30-ft. skylight room to reintroduce natural light obscured by centuries of encroaching construction, a new glass elevator and stone-encased staircase, along with new windows and detailed millwork throughout, some wood being reclaimed from other parts of the historic church. There was also considerable cataloging, removal, and protection of various historic artifacts including more than 5,000 organ pipes ranging from 2 inches to 30 feet as part of the work.

At the conclusion of the project, Delphi Construction went on to win an Excellence in Construction Award for their work at the Cathedral Church of St. Paul.

As a footnote to the story, an accidental discovery has finally shed light on the source of the mysterious flooring system. A structural engineer who had been associated with the project happened across an article on archaic construction technologies. There, on one of the pages, was an old black-and-white illustration featuring the exact system he had seen at the cathedral. A scanned antique catalog page from the Truscon Steel Company of Youngstown, Ohio, promoted their turn-of-the-century product known as “Truscon Floretyle System.”