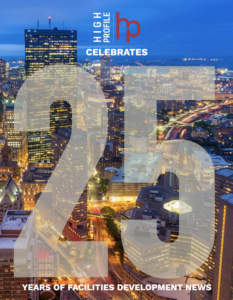 We’d like to thank you – our readers, contributors, and advertisers – for continuing on this journey with us as we highlight the news and developments in New England’s AEC and real estate industries.

This special anniversary edition celebrates the last 25 years of commercial development in New England, including a look back at High-Profile over the years and featuring the stories of architecture, engineering, and construction firms throughout the region.

From all of us at High-Profile… Enjoy the read!

During the last quarter century, the architecture, engineering, and construction (AEC) and real estate industries have seen a transformation in the way commercial developments are designed and built, and in the priorities that drive modern architecture and construction projects. High-Profile Monthly has been covering this evolution in the New England region, including the highs, lows, challenges and amazing feats of architecture, since our first issue was published in September of 1997. 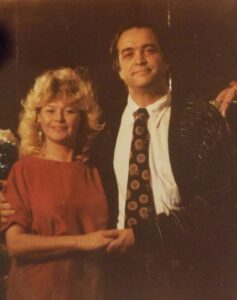 Michael and Kathy Barnes in 1997

Starting High-Profile was a natural progression for our founder, Michael Barnes, who had spent much of his career working for other news outlets and organizations that covered the AEC industry in New England. Michael and his wife, Kathy Barnes, joined forces to establish a publication focused exclusively on construction and development in the region to meet the industry’s need for targeted coverage of “high-profile” projects in the area.

“The first issue of High-Profile was published with no money down. We didn’t have enough money to pay the printer so we had contracts with our advertisers that we brought to the printer to signify that we had the commitment and ability to pay after the paper was printed. After the first issue, we were on our way.”  -Michael Barnes

Engaging with industry organizations and attending their monthly meetings played a big part in expanding our understanding and familiarity of happenings in the New England states, and provided an opportunity to network within the industry. Additionally, dedicated advertisers like Joseph Clancy and Dan Bent of American Plumbing & Heating have been with us from the very first issue. This, along with our commitment to utilizing emerging technologies to deliver the news, enabled High-Profile to grow and by 2003, we were publishing a regular monthly edition.

“Most influential in introducing me to the AEC industry and High-Profile to the leaders of our industry was my affiliation with Massachusetts Building Congress. Jan Breed, MBC’s executive director, and Blasdel  A. Reardon, John Cannistraro, Jr., Jeremy Ritzenberg, Joseph Gallagher, Dan Perruzzi, Michael Reilly, Joe Flynn, and Ben Goldfarb (all past presidents of MBC) were a few of those who helped me in developing High-Profile as a niche publication for commercial construction. Additionally, Marc Margulies was the person to introduce me to the International Facility Management Association (IFMA), which expanded our readership to more facility managers in the Boston area.”  -Michael Barnes

In the early days of High-Profile, the Great Dane became the company’s official mascot, named after Michael and Kathy’s beloved family pets.

In the last 25 years, the industry has faced ups and downs and periods of growth and challenges, and our family-owned business has been able to navigate through these times with a “slow but steady” approach.

“Being a family-owned business has contributed to our ability to weather an ever-changing industry, as a shared passion and collaborative spirit was definitely crucial in High-Profile’s early days. Having my parents, Ralph and Marion Barnes, on board as founding editors was a huge part of our success and when our daughter Anastasia joined the company in 2000, we all worked together to get the job done.”  -Michael Barnes

In 2002, High-Profile had grown enough to allow us to expand our home office in Pembroke, Mass. Then over the next few years, we added several annual supplements to our regular monthly issue, which included the Green Supplement; the Mechanical, Electrical, and Plumbing (MEP) Supplement; and Women in Construction. 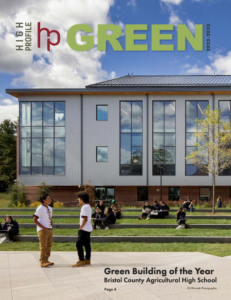 “When we published the first Annual Green Supplement, the focus in the industry was really on energy savings in building projects. High-Profile has been present for the evolution of the green building movement as LEED, Passive House and WELL have become well-established and sought out certifications. Flash forward to 2023, and the major focus is on meeting climate goals and working to minimize the negative impact our developments have on the environment, with these requirements now being regularly incorporated into every project at its inception.”  -Michael Barnes

As we continued to grow, and as more sophisticated technology became available, our team replaced our original website with a more user-friendly and accessible online newsfeed, and began sending out our FastFacts Friday newsletter via email, recapping the week’s headlines and keeping subscribers informed of the latest groundbreakings and developments in the region.

In 2013, we undertook a complete rebranding of the company, working with marketing and communications agency Nickerson to redesign our logo and color palette and establish a fresh look for the publication. In time, we had become known to our audience simply as “HP,” and our new logo reflected that. The publication was further elevated when we hired Yvonne Lauziere as art director. Her work brought the paper to a new level, as she designed each monthly issue with artistry and purpose. It was during this time that Anastasia began taking on a greater role within the company. 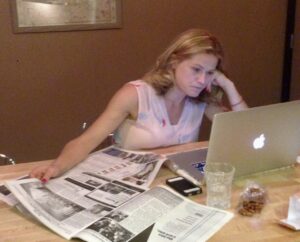 In 2013, Anastasia took on an expanded role in shaping the look, feel, and quality of content for High-Profile.

“Being a major participant in the rebranding of the company, which included launching the new website and further establishing a consistent and clean look and feel of the publication, really showed me that I was invested in HP’s future and in the success of the company. I really was taking ownership of what I could bring to the table, and to the vision of the company, and in helping shape the look, feel, and quality of content for High-Profile.”  -Anastasia Barnes

After attending a few events held by the National Association of Women in Construction (NAWIC) and watching them celebrate women in the industry, Anastasia wanted to do the same by recognizing the women that were breaking barriers by pursuing careers in the AEC space, and HP’s Women in Construction Supplement was born. 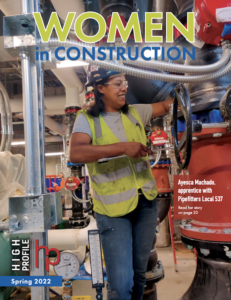 “As a young woman in the industry, I would be attending events and be surrounded by a sea of men, and I would naturally gravitate to the women in the room. So the opportunity to highlight women in the industry and show people what they were doing, share their journeys, and show how they were breaking the glass ceiling, I felt was important. It has been extraordinary to see the level of participation in this issue every year as women in AEC share their struggles and successes, and share inspiration for others just entering the industry.”  -Anastasia Barnes

Over the last decade, HP has followed the developments in design and construction as major attention has been paid to our effect on the environment and our role in climate change, in addition to the major strides being made to include women- and minority-owned businesses in all stages of a building project. In 2018, we worked with future design firm Fathom to establish our vision, which is to provoke people to act on their own vision to build a better world. As a result, we launched the Build Better podcast and produced our special Vision issue to highlight the people teams, and organizations that are leading the way and changing the industry for the better.

“Our driving force has always come from the desire to tell the stories of the people and companies that are doing better, whether it be through prioritizing green principles in their everyday operations, or establishing ways to elevate women or people of color in the industry. It is really an honor to work in an industry of people who are passionate about what they do and who are tackling the big challenges we as a society are facing.”  -Anastasia Barnes 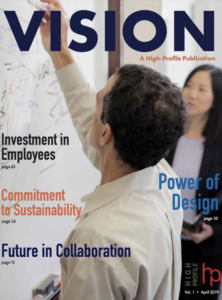 We’re proud that we have expanded from our early days to now include editor Emily Langner (Ralph and Marion retired in 2020, both at the age of 93!), vice president of sales Elizabeth Finance, and account executives Mark Kelly and Betsy Gorman. Yvonne is still with us as our amazing art director, who continues to elevate the quality of our online and print publications with her immense design talent.

In the next 25 years, we will continue to utilize the latest digital tools and technology to bring facilities development news to people in new ways and highlight the softer side of design and construction, telling the stories of the people and companies that are leading from the heart and inspiring others with their commitment to making the world a better place. As the voice of New England’s AEC and real estate industries, we celebrate this milestone with all of you – members of this truly unique community – with whom we are honored to call our colleagues and friends.

A Letter from High-Profile’s Founding Editors, Ralph and Marion Barnes 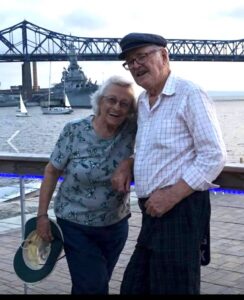 Twenty-five years!! What monumental changes our world has gone through in that short time. Back then, the personal computer was in its infancy. To get the paper published in those first years, we literally cut and pasted news and photos for galleys to be delivered to the printer. We thought we were just about the top of the ladder when we were able to lay out a whole issue on a disk. The possibility of publishing on the web was so far-fetched that nobody gave it any consideration….except our founder, Michael Barnes. He saw the potential before anyone else and he acted on it!  Thanks to his vision, High-Profile was then, and still is, created by an incredible team from all over New England, all working remotely.

We have seen real estate companies come and go, small companies expand to become major players in the market, major companies close after years of successful operation, and companies merge and companies split. New developments, whether in big cities or small towns, were always interesting to our readers, and real estate association news was of enormous importance. We have reported on them all.

One of our first advertisers, American Plumbing & Heating, who advertised in our very first issue, still holds a spot on the inside cover. And here we are, all these years later, publishing both print and digital issues each month.

The last 10 years in commercial real estate are reported to be among the most transformative the industry has ever seen. It is reflected in the contents of our publication. Publisher Anastasia Barnes has done a splendid job adhering to our original principle of keeping the information interesting, accurate and up to date, and we’re not saying that because she is our youngest granddaughter.