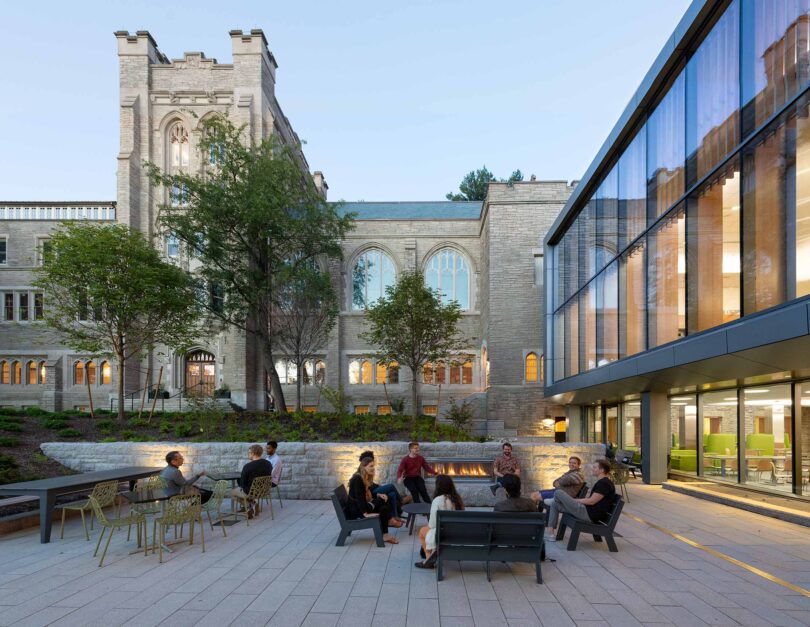 Boston – Shawmut Design and Construction, in partnership with Ann Beha Architects, announced it has completed a renovation and expansion project at Harvard Divinity School’s (HDS) Swartz Hall in Cambridge, Mass. 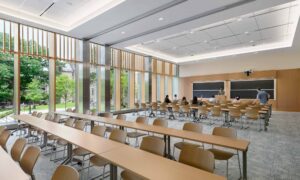 The 60,000sf renovation and 13,000sf expansion began in May 2019 and was completed in August 2021. Built in 1911, Swartz Hall, Harvard University’s only major Collegiate Gothic structure, is the center of academic, administrative, and student life at the Harvard Divinity School, the first nonsectarian theological institution in the United States.

As part of this major renovation, the first since the building’s completion, the team created an environment reflective of the school’s multireligious community and the many faith traditions practiced by students, staff, and faculty. Additionally, new ramps, elevators, and accessible entryways, gathering spaces, and restrooms are present throughout the building. 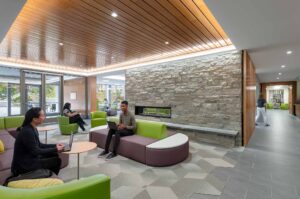 The 2-story addition, scaled to the century-old building, features a completely-glass facade, which dissolves the separation between interior and exterior and allows in ample daylight. At the ground level, a dining commons includes a cafe and fireplace lounge built of repurposed granite from the original building. A new outdoor terrace and gas fireplace, built of granite quarried in Deer Isle, Maine, functions as a front porch while adding new outdoor gathering space to the campus. 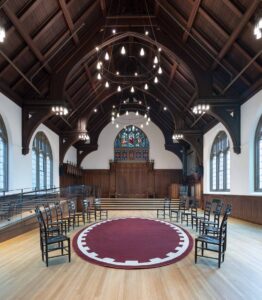 Improvements to mechanical systems and the building envelope, including replacement of the original Vermont slate roof, significantly reduce energy consumption. The exterior wood doors, as well as some interior ones, were restored in Newburyport, Mass. by a woodworking company certified by the state as a minority/woman-owned business enterprise. Newly installed stained-glass windows used the same traditional techniques that created the original windows 100 years ago. The insulation helps keep the building airtight and minimizes the loss of heat in the winter and cool air in the summer. 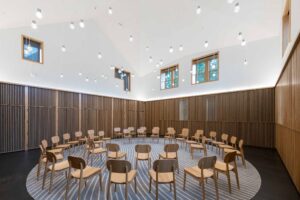 The old stack wing, originally containing five levels of book shelving, was removed to create three levels of classrooms and workplaces, as well as the new multi-faith space to create a building that serves all members of the HDS community. Historically significant spaces, including the Williams Chapel dating to 1911, were restored and modernized with new lighting, AV systems, and full accessibility.

The sustainability measures included in the building renovation target LEED Gold or higher as well as a Living Building Challenge Materials Petal and will help advance the university’s effort to combat climate change and to make Harvard a fossil-fuel-free campus by 2050. More than 50 trees and shrubs, with additional ground cover, were also planted.