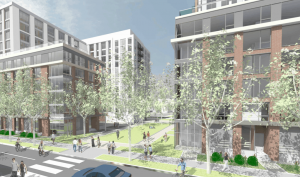 Boston – Leggat McCall Properties, along with its joint venture partner Multi-Employer Property Trust (MEPT), filed an expanded Project Notification Form with the Boston Redevelopment Authority for 3.1 acres of land in the South End. The site was purchased from the Boston Medical Center in late 2014.

The Harrison Albany project will bring a state-of-the-art multifamily residential project, including 710 new apartments, to Boston’s burgeoning South End neighborhood. The development will bring additional activity and vitality into the community — rich in social diversity and culinary and modern arts. 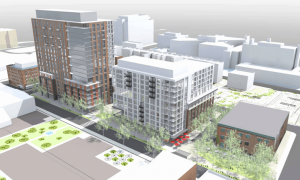 The proposed project will include two buildings ranging in height from 11 to 19 stories. The development site spans the block between Harrison Avenue and Albany Street, and between East Dedham Street and East Canton Street. In addition to the development of new buildings, the existing building at 575 Albany Street will be rehabilitated.

The project will add approximately 14,000sf of retail space and 40,000sf of office space, increase public open space, and provide a green promenade between the two residential buildings and a new public open space next to the Gambro building on Harrison Avenue. The existing parking lots will be removed and replaced with underground parking.

As part of the retail, cultural space will be created.  The project team views this as an opportunity to embrace the project’s position between the vibrant artist community, historic industrial uses, new small businesses, and the strong residential neighborhood of the South End. While still in its early visionary state, the objective is to create a shared space for the community to collaborate and create.

In response to Mayor Walsh’s plan ‘Housing a Changing City: Boston 2030,’ calling for additional housing units by 2030, the project will include a mix of market-rate and affordable rentals designed to cater to a broad demographic in the city.

Bill Gause, Executive Vice President of Leggat McCall Properties said, “We are thrilled at the opportunity to take an underutilized site and create additional housing, public open space, and a bustling street life. We arecommitted to integrating the project with the vibrant fabric of the neighborhood, including the introduction of ground floor cultural space.”

The project will seek LEED certification, and the construction activity is expected to have a significant economic impact in the Boston metro area while creating green jobs for members of the Boston Building Trades.

“We are pleased to be a part of the transformation of the South End, and to further invest in the city of Boston,” stated David Antonelli, Executive Vice President and MEPT Portfolio Manager at Bentall Kennedy. “Thoughtful, contemporary development will assist in the South End’s ability to continue to attract employers in the creative, health, and educational sectors, and this project will provide a variety of options for future and existing neighborhood residents.”

Located on a main thoroughfare with excellent access to public transportation, restaurants, and entertainment, the site is also within proximity to several employment centers including the Boston Medical Center, Back Bay, the Downtown Financial District, and the Seaport District.

The team filed a Letter of Intent to the BRA in November 2015, following acquisition of the buildings at 660 and 720 Harrison Avenue, 575 Albany, 100 East Canton, and 123 East Dedham in late 2014, as Boston Medical Center implemented a consolidation and renovation of its campus.