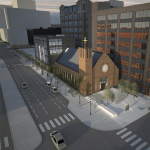 Our Lady of Good Voyage Chapel / rendering by ADD Inc./Stantec

Boston – Morgan Stanley, Boston Global Investors, and the Archdiocese of Boston broke ground for Our Lady of Good Voyage Chapel at 51 Seaport Boulevard. The construction of a new chapel signifies a historic intersection of old and new as the archdiocese officially joins the 23-acre Seaport Square project, the largest approved planned development area in the history of the city of Boston.

Designed by ADD Inc./Stantec, the new 5,000sf structure, capped by a steeple outside and including a choir loft, will be located at the intersection of Seaport Boulevard and Sleeper Street. It is slated for completion in late 2015.

Tamara Roy, principal architect at ADD Inc./Stantec, added, “The design of the new chapel for Our Lady of Good Voyage was inspired by traditional churches found in the countryside of Italy that have roman bricks of varying tones and depths with simple forms.”

Standing at one-story tall and spanning 5,000sf, the chapel will showcase a traditional bell tower design and an A-frame roof. It will stand as a religious cornerstone for the development and for the Seaport District at large. Its design will continue to pay tribute to its Boston maritime roots, incorporating a rich tapestry of symbolism with nautical elements imbued with religious significance.

The carved Gothic railing that will enclose the shrine previously was located in Holy Trinity German Catholic Church on Shawmut Avenue in Boston. Additional religious artifacts and furnishings from surrounding local churches will also be preserved and featured throughout the new structure, including an extraordinarily rare statue of the Blessed Virgin holding a model of a Gloucester fishing schooner that will be enshrined prominently in a devotional chapel near the entry.

Plans call for a basilica layout to honor the designs that originated in the earliest churches raised after the Roman persecutions. The sanctuary of the church will be oriented eastward, following the traditional arrangement where sunrise connotes Christ’s second coming. This symbolic meaning will be enhanced with an expansive window over the altarpiece.

The church’s entry is currently designed to be flanked by stained glass images of the Virgin Mary and St. Peter. Diamond-patterned glass reminiscent of fishing nets, in addition to the coats of arms of Pope Francis and Cardinal O’Malley, are designed to accent the windows. The narthex, a welcoming reception area, links the main doors to the nave entrance beyond it where a shrine and the priest’s vestry can be found. The central space of the nave has a wood ceiling much like the overturned hull of a boat and the barque of Saint Peter. It is inspired by numerous New England churches whose ceilings were constructed in ages past by ship carpenters.

Native American wood will be featured in the wall paneling, and furnishings and ship models will be integrated into the design of the interior. The stained glass and woodwork will also include marine-themed ornaments and inscriptions.

Mayor Martin J. Walsh said, “It’s rare that we have an opportunity to construct something that is informed by rich history and, at the same time, will be central to the fabric of this up-and-coming neighborhood.

A freestanding altar has a handcrafted ambo with a baptismal font designed especially for Our Lady of Good Voyage. A skylight overhead will cast sunlight onto the altar. Behind it, and serving as the location for the tabernacle, will be a marble altarpiece that once stood in St. Adalbert’s Parish in Hyde Park, Massachusetts; an oversized east window over the altar will be repurposed from St. Catherine of Siena in Charlestown. Two statuary niches from Holy Trinity will also embellish the rear wall of the sanctuary. On either side of the sanctuary are handicapped ramps, separated by wood-carved screens. The meeting room space will include a backlit stained glass window from the former chapel, as well as grisaille glass featuring nautical scenes reworked from panels taken from Holy Trinity. Our Lady of Good Voyage will have a choir loft and organ chambers with a balustrade repurposed from the loft at Holy Trinity. A rose window composed of an octofoil panel from St. Augustine’s in South Boston will illuminate the space with seating for 46 choristers.

Mayor Walsh added, “In an area where millions of square feet of new development are now under construction, the 5,000sf Our Lady of Good Voyage Chapel stands out as a testament to the power of community and the importance of faith. The partnership between the Archdiocese of Boston and Boston Global Investors embodies a spirit of good will that will help ensure that the Seaport is a place where people are welcome to live, work, play, and pray.”

The chapel is the first Catholic worship site to be built in Boston in more than 50 years. The existing Our Lady of Good Voyage chapel across the street on Northern Avenue has been a religious foundation in Boston for over half a century.
Cardinal Seán O’Malley said, “Our Lady of Good Voyage Chapel, newly constructed at a central location in the Seaport, will continue to serve as a place of prayer and comfort to a diverse community of professionals, families, and travelers. The new chapel design will embrace the history of generations of maritime workers and welcome all who will live, work in and visit the Seaport.  We are grateful to Boston Global Investors for partnering with us, and in particular to John Hynes, for his commitment to the Seaport and his recognizing the importance of a vibrant Catholic presence to serve the local faith community.”

John Hynes, Managing Partner at Boston Global Investors, said, “We are thrilled to be developing this chapel for the Archdiocese and feel quite honored to be doing so.  The existing chapel, which is over 60 years old would have required an enormous amount of capital improvements, while the future site, right around the corner on Seaport Boulevard, perfectly supported a new chapel. No doubt this new chapel will better satisfy the long-term criteria of the Archdiocese and its growing population of parishioners in the Innovation District.”

Our Lady of Good Voyage, often referred to as the Fish Pier Chapel, was originally founded on December 8, 1952 on land donated by Frederic G. Dumaine, Jr. Once home to Boston’s dockworkers and sailors, its first mass saw 200 parishioners from the local community.

With its groundbreaking, Our Lady of Good Voyage represents the ideal mergence of tradition and innovation to serve a unique and growing congregation in Seaport Square. Over the next several years, Seaport Square is expected to develop into twenty blocks of world-class retail, business, and residential space, knitting together the Financial District, Waterfront, Fort Point Channel and Fan Pier. Through the anticipated construction of five new streets, over 20 buildings, and four prominent public gathering areas, Seaport Square is expected to redefine the meaning of a unified, walk-able, and dynamic neighborhood.

Large areas of open and green space, direct access to public transportation, and energy efficient design will be embedded within each building. Seaport Square has direct access to downtown Boston as well as to the I-93 and I-90 interchange, is located in close proximity to Logan Airport and Amtrak’s South Station, and has easy access to public transit with the Courthouse Silver Line Station immediately adjacent to Courthouse Square. Less than a quarter of a mile north of Seaport Square are The Rose F. Kennedy Greenway and Financial District, just steps south of Seaport Square is the thriving Fan Pier, a 21-acre development.