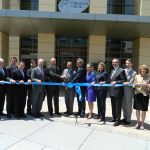 Cambridge, MA – On the sixth anniversary of his signing into law the Massachusetts Life Sciences Initiative, Governor Deval Patrick joined Pfizer leadership, life sciences leaders and local and state officials to celebrate the grand opening of Pfizer’s new 280,000sf facility in Kendall Square.
“It is fitting that on the sixth anniversary of the Life Sciences Initiative becoming law, we are here celebrating the continued growth of one of our leading Life Sciences companies,” said Governor Patrick.

Led by Pfizer Group vice president of BioTherapeutics R&D, José-Carlos Gutiérrez-Ramos, Ph.D, the new laboratory facilities, located in the heart of Kendall Square, are leased from the Massachusetts Institute of Technology (MIT). Pfizer scientists will work in state-of-the-art lab space on a range of clinical programs across several therapeutic areas, including inflammation, immunoscience, rare disease, cardiovascular and metabolic diseases and neuroscience.

In addition to the new Cambridge R&D hub, Massachusetts is home to Pfizer’s research and manufacturing site in Andover and is the global headquarters for Pfizer’s Centers for Therapeutic Innovation (CTI) in Boston. By establishing collaborations with institutions working on novel and cutting-edge research, CTI’s model is designed to build an innovative network for drug discovery, with the goal of bringing new, targeted therapies to patients quickly.

“Pfizer’s unified presence in Cambridge reinforces our 15-year commitment to Massachusetts’ Life Sciences community,” said Mikael Dolsten, M.D., Ph.D., President of Research and Development at Pfizer. “Our goal in Kendall Square is to nurture collaborative and innovative science that can translate into new therapies for patients.

The Life Sciences Initiative is a 10-year, $1 billion investment in the growth of the state’s life sciences sectors.  the Massachusetts Life Sciences Center has invested or committed $535 million to fund translational research, company formation and growth, workforce development and infrastructure, leveraging an additional $1.5 billion from outside sources. These investments have helped Massachusetts emerge over the past six years as the undisputed global leader in life sciences.

A March 2013 report by The Boston Foundation showed that the Patrick Administration’s investments in the life sciences sector are making a measurable impact on job creation and spurring economic growth across the Commonwealth. The report also encouraged continued funding of the Life Sciences Initiative. The research found that over the last 10 years the state’s life sciences cluster has created jobs in Massachusetts at a faster pace than any other industry sector in the Commonwealth, and since 2008, Massachusetts has overtaken all competitor states in the rate of life sciences job creation. The report also commended the MLSC for its administrative efficiency and sound judgment in its investments and applauded the Governor and the Legislature for their foresight in creating the Center.