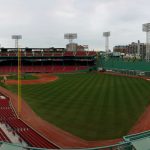 Boston – Gilbane overcame difficult winter conditions and an aggressive schedule to safely complete improvements and renovations at Fenway Park in time for the Boston Red Sox home opener vs. the Washington Nationals on April 13.

In addition, renovations were completed to the ground level center field concession stands and a historical remodel of the left field flag pole, AKA the “Carlton Fisk Pole.” The new construction adds a total of 200 new seats to Fenway Park and is considered the last major seating addition in the park’s lifetime.

The architect for the project is Somerville-based D’Agostino Izzo Quirk Architects, Inc.

“The project demanded an aggressive schedule, with all construction operations being completed before the Red Sox opening day on April 13th,” noted Matt Haverty, director of Gilbane’s Boston Interiors Group. “There were several logistical challenges including working safely through the bustle of the Fenway neighborhood while keeping the park fully operational during the peak season for historical tours.”

The project marks the fifth year of Gilbane’s successful partnership and history at Fenway, having completed projects in 2007, 2010, 2012, and 2014.