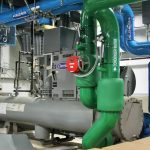 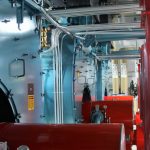 The new building was constructed while keeping plant building No. 1 and the Concord Hospital fully operational at all times. It was requested that current equipment in the existing boiler room be reused and incorporated into the design of the new plant. This included the main hospital’s condensate receiver and fuel oil pumping system. Utilizing Revit, the design team was able to closely coordinate the boilers and flue stack, boiler cat-walk, chillers, pumps, cooling towers, floor and trench drains, dry pipe sprinkler system, domestic water system, natural gas piping and meter, main electrical switchgear, panel boards, VFDs and major conduits, storm and sanitary waste piping. The existing pad-mounted transformer was reused and mounted on the roof on a specially preconstructed structural curb. The design team, contractor, and owner worked closely to locate service feeders to and from the transformer, avoiding interference with the large steam piping and boiler flue within the boiler room below. New electrical feeders were connected to the existing paralleling switchgear while minimizing impacts and disruptions to normal hospital operations. The relocation of existing chillers and cooling towers was accomplished during the lower load periods of the year, and the cooling system was brought back up to full capacity in time to meet the peak demand season.