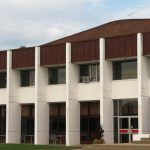 BATL at Northeastern U 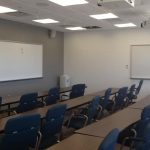 The project, which involved working within an existing concrete building constructed in 1968, proved to be a challenge in regards to the installation of the mechanical and electrical systems that were required to support the new laboratory space. The majority of the building’s systems, particularly the fire alarm, were original to the building and therefore did not meet current code and were not robust enough to support a lab project. Mechanical and electrical infrastructure upgrades were required in order to meet current code as well as meet laboratory usage requirements.

Fitzemeyer & Tocci worked closely with the project team and local inspectors to design a building wide fire alarm system upgrade as well as HVAC and plumbing infrastructure within the building. Due to the age of the building and it having only partial sprinkler coverage, it was determined during the preliminary design stages that the current fire alarm system would need to be upgraded in order to satisfy the local authority having jurisdiction (AHJ).

Fitzemeyer & Tocci’s proactive approach to designing the fire alarm system upgrade fulfilled the local AHJ’s requirements. The fire alarm system was a key element in saving the University the cost of installing sprinklers throughout the entire building and contributed to the overall success of the project.

A new HVAC system, including a new variable air volume (VAV) rooftop air handling unit (AHU) and exhaust fan, was designed to serve the lab and the lab’s support spaces, with an additional rooftop unit serving the classrooms and office areas. The units were carefully coordinated with the architect and structural engineer in order to easily locate them while maintaining the structural integrity of the roof, which was not originally constructed to hold large equipment. The new VAV units allow the lab space to operate efficiently while maintaining space pressurization and proper exhaust levels.

During construction, it was discovered that a new hot water heater had been installed in parallel with the project and incorporated a new backflow preventer deviating from the original design intent. The design team met with the local plumbing inspectors and found a way to install a solenoid purge valve on this system in order to allow for localized separation of potable and non-potable water to the lab. This solution avoided installing hundreds of feet of new plumbing pipes, which would have been an extremely difficult – and costly – task given the concrete building structure. Avoiding the installation of the additional piping ensured that the new laboratory space opened on time in accordance with the University’s schedule.

The Biopharmaceutical Analysis Training Laboratory (BATL) is a newly created, state-of-the-art training laboratory located at Northeastern University’s Burlington innovation campus. The BATL was established thanks to a public-private collaboration between Northeastern University and the Waters Corporation. Courses offered at the BATL are designed to combine fundamental and applied knowledge in protein and peptide analysis and regulatory perspectives.