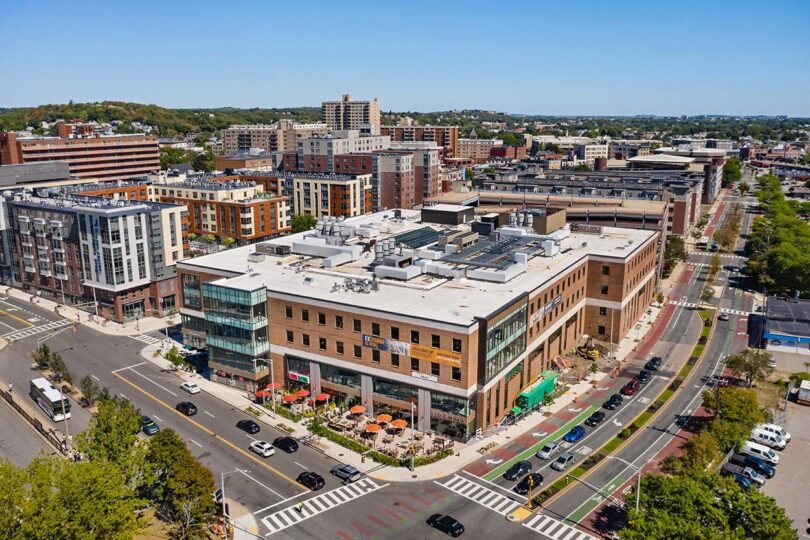 Exchange 200 is a 4-story, over 352,000sf mixed-use building that is currently being converted and modernized to Class A lab and life sciences-ready space. Construction on the conversion is expected to be completed this fall.

With two companies focused on groundbreaking life sciences research and the third a global firm focused on advanced materials technologies, the leases add to the rapid life sciences and R&D market growth in Malden, one of Greater Boston’s booming markets.

By signing a 53,000sf lease, Discovery Life Sciences is expanding its existing footprint in Malden. Discovery’s presence in the city began with the acquisition of In Vitro ADMET Laboratories (IVAL) in December 2021. With its sizable new lease signing at Exchange 200, Discovery will build highly advanced laboratories employing leading technologies. The company will offer pre-clinical, cell and gene therapy, and proteomics services out of its new Exchange 200 location to complement its AllCells division’s LeukoLab donor facility in Quincy and a second LeukoLab facility opening in Boston early 2023.

In addition to Discovery, Outer Biosciences will occupy a 15,000sf laboratory suite that Berkeley and Singerman built-out on a “speculative” basis, one of three such suites constructed at the property intended to accommodate growing laboratory companies who need to move quickly into space that’s already pre-built.

Exchange 200 will also be the new home and laboratory for an advanced materials company relocating from Cambridge and expanding into nearly 22,000sf at the building, using the space to further advance its technology while accommodating the company’s increase in staff and customer growth. The first move-ins are scheduled to take place at the end of 2022, and Discovery is expected to open its new laboratory in late 2023. Additional leases are expected to be finalized in the coming months.

Further, as part of the redevelopment, three fully built out speculative lab suites furnished with lab benching, along with in-place systems including vacuum and compressed air systems, are being constructed, with Outer Biosciences set to occupy one of these spec suites.

All of the Class A lab enhancements support previous investments to the building including a new facade of floor-to-ceiling glass, a new 2-story atrium lobby, expansive fourth floor skylight, and more than 20,000sf of street-level retail space.

Construction of Exchange 200’s lab upgrades are being undertaken by builder Dellbrook JKS, while TRIA is serving as the project architect.

Leasing for the property is led by the team of Molly Heath, Peter Bekarian, Chris Decembrele, and Maggie Dore at JLL, who represented Berkeley and Singerman in the three lease transactions. On the tenant side, Discovery Life Sciences was represented by a team from Colliers, with Robin Zellmer leading the corporate relationship and Evan Gallagher and Caitlin Mahoney leading the local efforts. Outer Biosciences was represented by Bob Richards and Grey Gettleman at Cushman & Wakefield.

Malden Mayor Gary Christenson said, “We’re making solid investments and huge strides to create jobs and economic opportunity for Malden residents while encouraging scientific and R&D progress that benefits not only our community, but people across the country and around the world. And we’re just getting started as more companies like Discovery Life Sciences and Outer Biosciences recognize the unprecedented potential that Malden offers to help these companies successfully achieve their missions.”

Molly Heath, senior managing director of JLL Boston, said, “The most exciting thing about Exchange 200 is it meets the needs of a wide variety of tenants. It offers both spec lab suites so young companies can conserve capital for their team and R&D. And it offers shell space on lower floors that can be built out for more specialized programmatic requirements. That flexibility has been key to our lease up.”