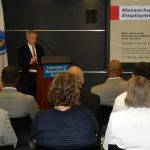 Boston – Northeastern University’s Dukakis Center for Urban & Regional Policy released new data on the growth of the life sciences sectors in Massachusetts, and the importance of these sectors to the economy. The data was presented at UMass Boston’s Venture Development Center by Alan Clayton-Matthews, associate professor and director of quantitative methods in the School of public policy and urban affairs at Northeastern University.

Massachusetts ranks #1 per capita in the nation in total life sciences employment by a wide margin, with 1.8 times the number of jobs per-capita as California, and 2.3 times the number in New York.

“As of 2014, all of the top 10 major drug companies in the world have set up shop in Massachusetts,” said Barry Bluestone, Director, Kitty and Michael Dukakis Center for Urban and Regional Policy.

The industry sectors targeted for investment by the Massachusetts Life Sciences Center (MLSC), the agency charged with implementing the Massachusetts 10-year, $1 billion life sciences initiative have been growing rapidly, with 17.5% growth since 2006, compared to 1.4% job growth in the overall state economy.

Bluestone added, “ The major drug companies wanted a front row seat to acquire small life science firms and their discoveries. And what helped make this possible?

Small life sciences firms received support from the MLSC in the form of accelerator loans, research and development funds, and interns that help them translate their ideas into commercially viable products.”

“Long-term prospects for life science employment in Massachusetts are excellent,” saidClayton-Matthews. “Worldwide demand for the Commonwealth’s life science goods and services should grow as the population ages and as it grows wealthier. Moreover, thisdemand is less affected by the business cycle than most other economic activity, and sothe life science sector provides a hedge against recession.”

“While some states are still following the old-school model of trying to attract businessesby offering tax incentives and subsidies, Massachusetts has followed a smart, innovative strategy,” said Bruce Katz, Vice President, Brookings Institution and Co-Director, Brookings Metropolitan Policy Program. “Governor Patrick’s Life Science Initiative is exactly the kind of strategic investment that builds on the commonwealth’s distinctive assets and sets a platform for sustainable growth. By focusing on the entire life sciences “ecosystem,” Massachusetts has attracted the world’s largest pharmaceutical companies and medical device manufacturers not simply to be near the state’s great universities and teaching hospitals, but to have a “front-row seat” when it comes to acquiring smaller firms with new innovative products and therapies. As a result, Massachusetts now has more bioscience jobs per capita than any other state in the nation.”