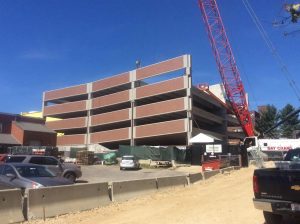 Dover, NH – A 138,000sf, five-level, precast parking garage is being rapidly erected within 2 inches of a new steel-framed, two-story police station being constructed at the same time. The goal is to have the precast garage open before winter. The police station won’t be complete until early next year.

Erection of the police station had to start first, according to Andrew Martino, project manager for the contractor, Harvey Construction Company, because there is a common block firewall between the two structures that had to be built prior to the precast erection. “But what is going to end up happening is that, even though the precast garage started later, it will finish much earlier than the [steel-framed] police station. 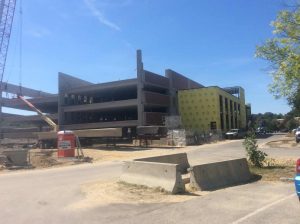 The two-bay-wide, five-bay-long garage fits in a 121-ft. by 212-ft. It consists of 332 precast pieces, including 141 double tees (totaling 94,000sf), precast concrete columns, beams, spandrels with thin brick, wall panels, a precast stair/elevator tower, and a second precast drop-in stair in another corner of the building.

Exterior design elements of the garage consist of thin brick spandrel panels in a picture-frame layout.

The thin brick architectural surface was selected, said Martino, to both match the brick used on the police station and to be in keeping with the downtown Dover Mill aesthetics.

Because the garage is so close to the 31,000sf police station (a category 4 critical facility), the durability and innate fire resistance of precast was critical, according to Timothy Breen, sales manager with Dailey Precast. Precast wall panels and spandrels with infill panels are utilized where the two buildings abut for fire separation, and a fire-rated foam is installed along vertical joints of the precast wall panels. Typical column and spandrel framing covers the rest of the garage perimeter.

The project also showcases how precast construction can fit in the tightest of places. The use of precast components requires less staging area at the jobsite. This was a big advantage since it kept the worksite clean and allowed the police station to be constructed at the same time. Precast members were trucked in sequentially as needed.

“Since this is a parking garage,” Martino added, “precast was the most economical way to build, not only from a constructability standpoint but from a speed standpoint. We are erecting a 300-plus space parking garage in about five weeks. This type of structure could not be built in any other way in that time frame.” The garage is also projected to come in on budget.