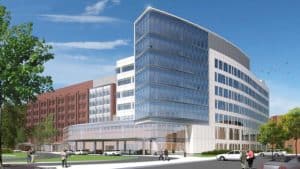 Also, 400 feet radii panels were cast with pre-installed granite to achieve the appearance the designers sought. In addition to its ability to provide the aesthetic choices, the precast panels were chosen for the project due to their speed in fabrication and installation process.

The new ambulatory care facility was constructed between two existing buildings and a courtyard, which left no space at the site to stage material until it was needed.

Two sizes of cranes were used to erect the panels due to the complexity of maneuvering on the site.  The granite-covered concave panels presented challenges as they needed to be handled very carefully.

The panels were erected along the inside wall of the facility that curves around the entrance.