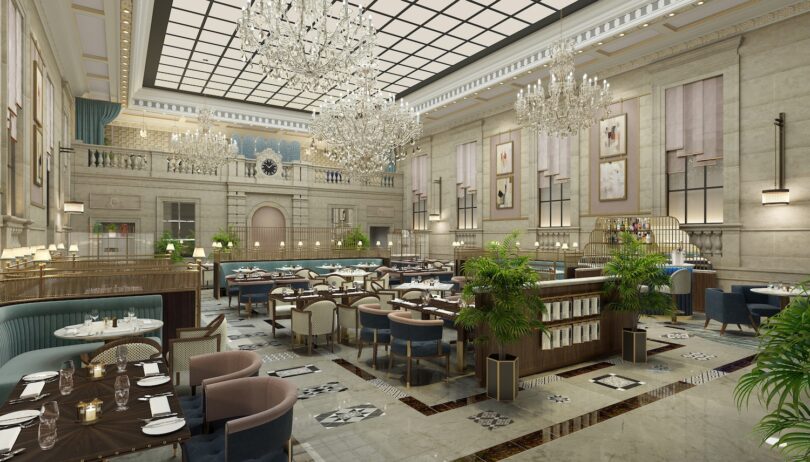 Boston –  The concept for the destination restaurant, GRANA, in the historic The Langham, Boston hotel was recently announced, a major milestone in the renovation that is currently underway.

GRANA will be set in what was once the grand hall of the Federal Reserve Bank of Boston, which dates back to 1922 and whose facade was designated as a Boston Landmark in 1978. Shawmut Design and Construction, in partnership with Dyer Brown Architects and interior designer Richmond International, is restoring the original glamour of the space while bringing it into the modern world.

The perimeter of the ceiling was retained and restored to show off the original decorative box trims and ornate plaster florals, which have been adorned with new gold leaf. The original brass Federal Reserve seal that was originally embedded when the bank first opened in 1922, remains at the center of the room, embedded in the terrazzo flooring, which was restored and infilled as needed and color-matched to the original floor.

The soaring ceilings; ornate moldings and fixtures; new, lush velvet furniture; and world-class art collection; will be complemented by a menu of Italian family-style meals served in a comfortable, yet glamorous setting, reminiscent of an afternoon in Italy.

The renovation, which began in 2019, will reflect the rich history and highlight the building’s architectural elements, and is expected to be completed this spring.

The project, spanning across the 288,000sf of the hotel, includes a renovation of all 312 guest rooms, eight two-floor loft suites, and the chairman’s suite, which will include a spacious living room, dining room, pantry and a grand piano.

In addition to GRANA, the renovation includes the creation of the club lounge, a new private club space on the eighth floor, and a street level cocktail pub. The guest room corridors, lobby and meeting spaces will see new finishes, millwork, and furniture.