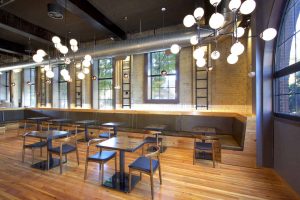 Chelsea, MA – Caldwell & Walsh Building Construction recently completed the Chelsea Station Restaurant Bar & Lounge on Everett Avenue in the only structure to survive both the 1908 and 1973 great Chelsea fires. The building formerly served as a fire station and a bank.

Reclaimed heart pinewood was used to for the flooring, banquette seating, and bar front. With limited quantities available, crews were especially mindful of being efficient as they simultaneously worked on these components. 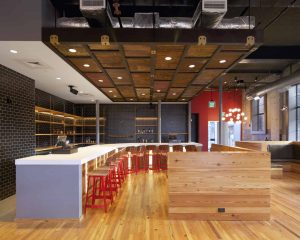 Another focal point is the suspended ceiling above the bar, constructed with weathered, corrugated metal decking. To further harmonize with the ambience of the room, the front of the bar is adorned with LED lit decorative mason jars. Period lighting also accents the 120-seat space.

This renovation also included a completely new HVAC system, upgrades to the fire suppression system, and installation of commercial-grade appliances for the full-service kitchen.