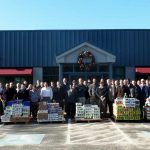 Middletown, Conn – Consulting Engineering Services (CES) recently won the annual Salvation Army Architects and Engineers Can Challenge and keeps their title as “King of the Cans” with a donation of over 12,000 food items.

CES is able to keep their title for the largest monetary and food donation of the industry mainly due to the internal competition held each year. Employees are divided into 12 teams and compete to collect the most cash and canned goods. “There is a rivalry amongst the teams to see which group can collect the most food and ultimately help the most people. We have teamed up with the Salvation Army for years and we are happy to be able to help people that are in need, particularly at this time of the year. We also like to win the office Can Challenge trophy which we now consider to part of the office décor” said George Keithan, Jr., President and CEO of CES. The team with the highest cans per capita wins the office trophy which is passed on from the previous year’s winners when The Salvation Army comes to collect the donation.

Each year CES has been able to donate an enormous amount of cans, yet this year they beat their previous record by more than 2,000 cans. The winning team had an outstanding per capita of 304 cans; setting the bar high for years to come.

The Salvation Army established the Architects and Engineers Can Challenge back in 1989 that invites local architecture and engineering firms to compete for top honors by gathering donations of non perishable food items and cash for the areas Salvation Army food support services. The number of items divided by the number of employees determines the winner.