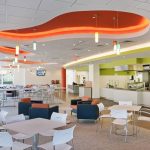 Only a year after purchasing Heritage Landing, Campanelli has transformed the property into one of the fastest leasing buildings south of Boston, signing over 53,000sf with eight tenants in a building that was previously vacant for five years.
New amenities on the first floor of Heritage II include a full-service café featuring the downtown eatery Sebastians, a grab-and-go coffee kiosk, a high-end fitness center and a modern, flexible 70-seat conference center. The building also features the first ever Micro-Mart in a multi-tenant suburban building. It offers snacks, drinks and sandwiches that can be accessed via a tenant’s FOB 24/7 with an automated pay station.
This was created to cater to the young, innovative companies in the building that work off-hours. Tenants can also enjoy an outside-patio during warmer months and enter through two sleek new entrances leading to a modern lobby with feature-wall. 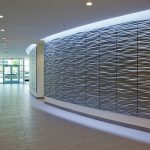 Campanelli employed an aggressive marketing strategy at Heritage Landing, noting a gap in the marketplace for companies priced out of downtown Boston, the Seaport and Cambridge but still looking for a “Live-Work-Play” Class A space with Red Line access.

The company hired Cushman & Wakefield’s suburban team of Mike Frisoli and Matt Morgan in conjunction with downtown brokers Dave Martel and Jason Roth in order to market the building to prospective tenants in both markets.
“We are continuing to see strong interest in our building from current Boston tenants looking for a value-alternative to downtown space. Heritage Landing offers Boston companies the same corporate identity, amenities and public transit of a downtown office at half the rental rate,” stated Mike Frisoli, Executive Vice President, Cushman & Wakefield. Half of current building tenants at Heritage Landing have moved from Boston and the Seaport District. 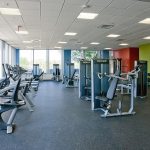 Located directly off Interstate 93 and Route 3A, Heritage Landing is a Class A office complex consisting of two buildings totaling 358,000sf.  The buildings are only seven miles from downtown Boston, are directly accessible via the MBTA Red Line “T” with free surface and garage parking at the high ratio of 4/1,000sfend. Other features critical to tech savvy businesses include redundant fiber service with two Verizon central station connections, Comcast cable, heavy power and back-up generator