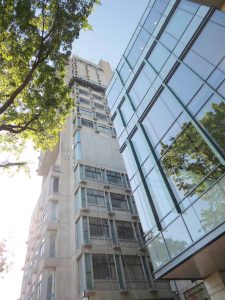 Boston – Work has been completed by Skanska USA on Boston University’s Sumner M. Redstone Building & Law Tower. The project, which was started in June 2012, included 96,000sf of new construction and 164,000sf of renovation.

The goals for this project centered on the academic program, which was focused on improving the classroom experience, increasing the amount of student space that included additional lounge areas and lockers, as well as expanding the existing library.

The first phase included the new construction of a 90,000sf West Addition to the current law school facility, or the iconic tower. The West Addition would serve as a supplement to the existing law school case-room and other instructional space inventory, along with an increase in the amount of student support space during tower renovation in Phase 2. 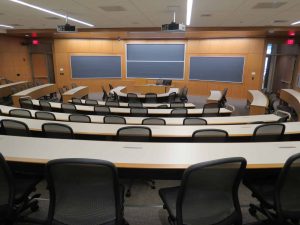 The second phase included a full restoration of the existing 164,000sf tower, the exterior building envelope, and the replacement of all infrastructure including life-safety systems, elevators, and interiors. The exterior restoration and interior life-safety upgrades to the adjacent Papas Law Library was also a portion of this project.

Recognizing the building’s importance to the campus, Skanska developed a program to restore the structure of the tower while continuing its use as the school of law. As is the case with most of the buildings of this era, the exposed, cast-in-place concrete façade along with the exposed aggregate precast panels did not weather well. The concrete had absorbed rainwater, and rusting of the reinforcing steel caused the façade to deteriorate. Steel-frame windows and accent panels used in the previous construction were also failing. 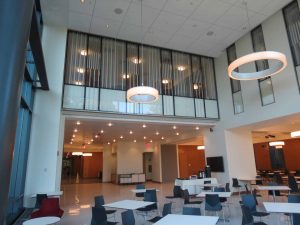 Further, the original construction did not meet today’s current standards for energy performance and efficiencies. To bring it up to the energy standards and codes of present day, the tower’s concrete and precast exterior were repaired with present day restoration methods, and the window and metal panels were replaced with an updated but similar design.

Both phases were completed during the law school’s study and exam period, which required off-hours work and a robust communications plan.

The project team worked very well to resolve some very difficult challenges and provide the services necessary to keep the law school operational throughout construction.

The project was completed in August 2015.