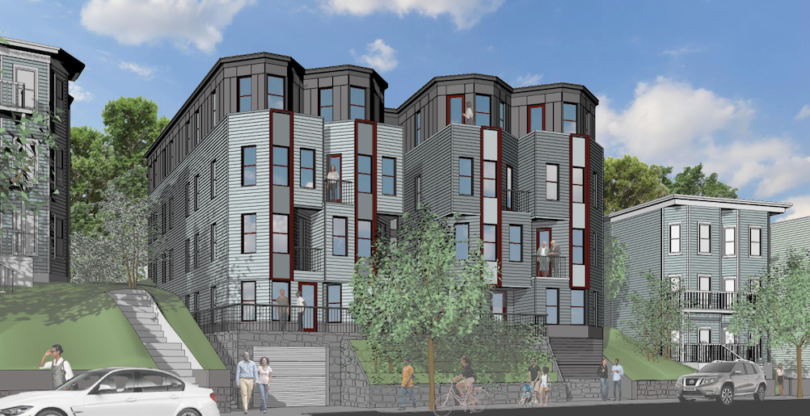 As part of the ongoing work to implement the goals identified by the community in PLAN: Nubian Square, the board also voted to tentatively designate NUBA as the development team for Parcel 8, an approximately 47,000sf parcel of vacant, publicly-owned land on Melnea Cass Boulevard and bounded by Washington Street and Harrison Avenue in Roxbury’s Nubian Square. NUBA’s proposal to create a 105,000sf development with approximately 102 residential units, including over 88 income-restricted, and 4,000sf dedicated for a National Center for Afro American Arts satellite museum was selected. The development team meets the BPDA’s diversity and inclusion criteria, and the project will now move into the Article 80 review process.

The first phase of redevelopment of the Mildred Hailey Apartments responds to a Request for Proposals (RFP) issued by the Boston Housing Authority (BHA). The project will replace 253 existing public housing units and construct 420 new income-restricted rental units at a range of income levels. The project will also construct a new Anna Mae Cole Community Center and Anna Mae Cole outdoor plaza. It will create 1,000 construction jobs.

In addition to the new projects, the BPDA board approved NPC’s for the final phase of the Old Colony BHA redevelopment project, which will reconstruct 208 income-restricted public housing units in South Boston, and for 47-55 LaGrange Street in Downtown, which will convert 176 residential units from rental to homeownership.