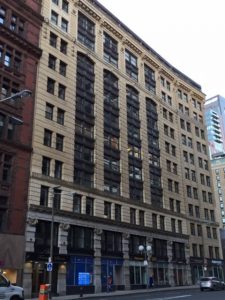 The building is constructed with a combination of brick, granite, and terra cotta stone. The lower two retail floors consist of granite columns. The center of the building consists of brick columns with ornamental iron metal bands above and below the windows on each floor. A terra cotta water table is set on the third floor above the retail space and below the top floor penthouse.

An investigation of the building façade uncovered several areas of vertical cracks in the brick columns due to water intrusion. Based on this evaluation, the owner contracted Abbot to repair the damaged brick areas, inspect and repair any terra cotta, completely repoint the façade, and paint all of the ornamental iron metal bands.

Complicating the project was the glass penthouse at the top floor with a terra-cotta water table at the base and ornamental dental molding that protrudes several feet from the front of the building. The structure and configuration of the penthouse made it unsafe to use conventional two-point suspended scaffolding that normally would have been braced from the roof and posed a danger to the glass. To circumvent the problem, Abbot chose a “mastclimber” platform that allowed access to the building without the need to repel from the top. Using the mastclimber, Abbot was able to traverse sections of the building to perform its maintenance work.

Consistent with the elaborate construction of the late 1800s, the building was designed with a U-shaped interior courtyard that allows natural light to penetrate the windows on that side of the building, as well as a view of the Kings Chapel Burying Ground at the corner of Tremont and Schools Streets below. The work on the courtyard consisted of minor repairs to the brick and painting of all the ornamental metal bays and ornamental iron areas above and below the windows similar to the front façade.

On the rear elevation in Court Square, Abbot repaired the cracked brickwork, replaced steel lintels and flashing, and painted the ornamental bands surrounding the storefronts and windows on the second floor.

On the rear elevation in Court Square, Abbot repaired the cracked brickwork, replaced steel lintels and flashing, and painted the iron metal surrounding the storefronts and windows on the second floor.