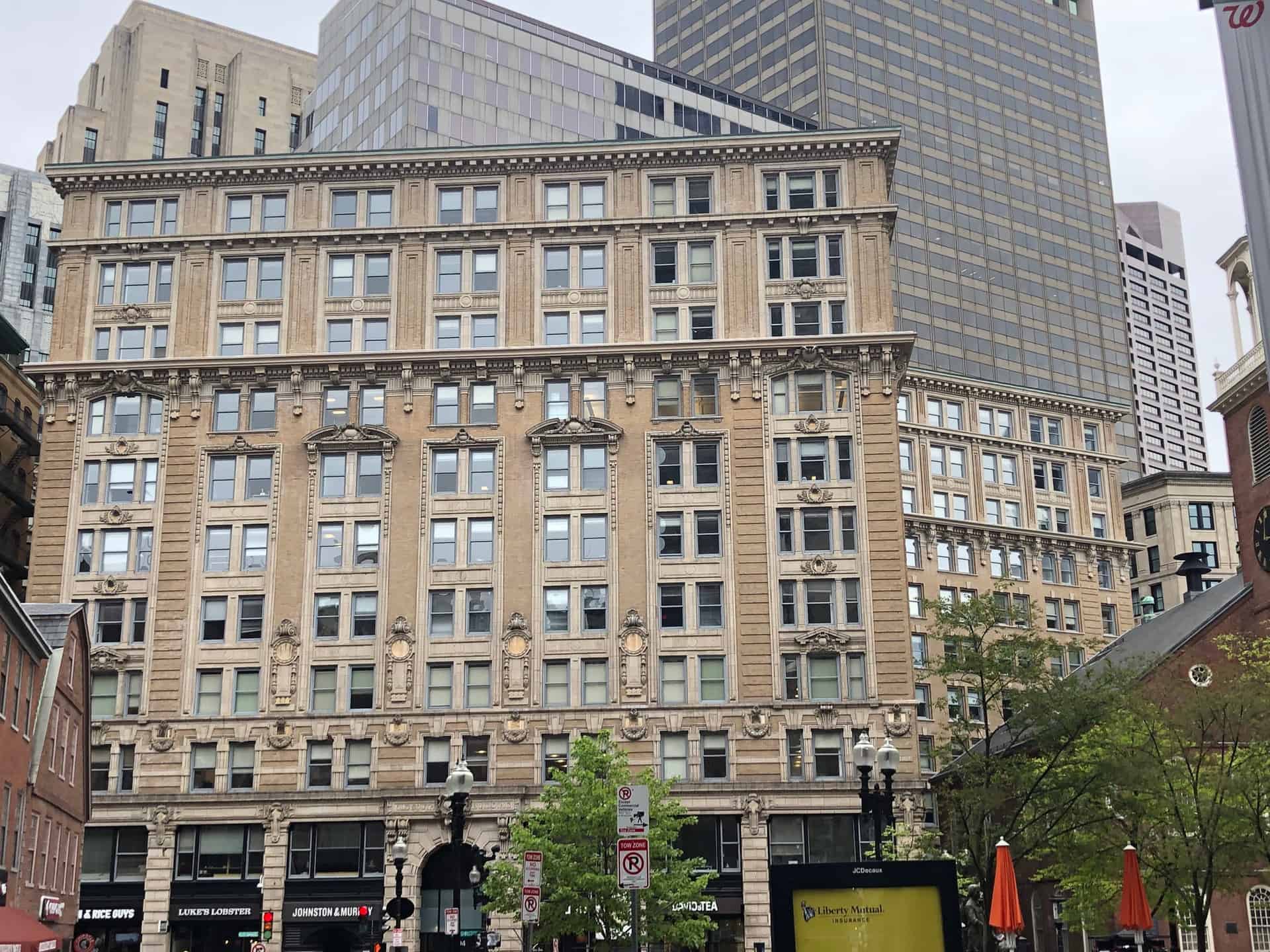 Collaborating with the engineering firm CBI Consulting, Inc. of Boston,  the design/build team was able to conduct all of the required repairs and renovations while working closely with Boston’s landmarks commission to preserve the historic integrity of the buildings.

The first phase of the project, June 2016, took place at the back left corner of the Spring Lane side of 294 Washington Street. This phase consisted of demolition of the brick corner from the roof to the ground to expose the steel column. Following demolition, Abbot repaired the deteriorated steel in the column and rebricked the corner to match the existing brick.  Abbot also conducted other repairs on the back wall and the interior light well. 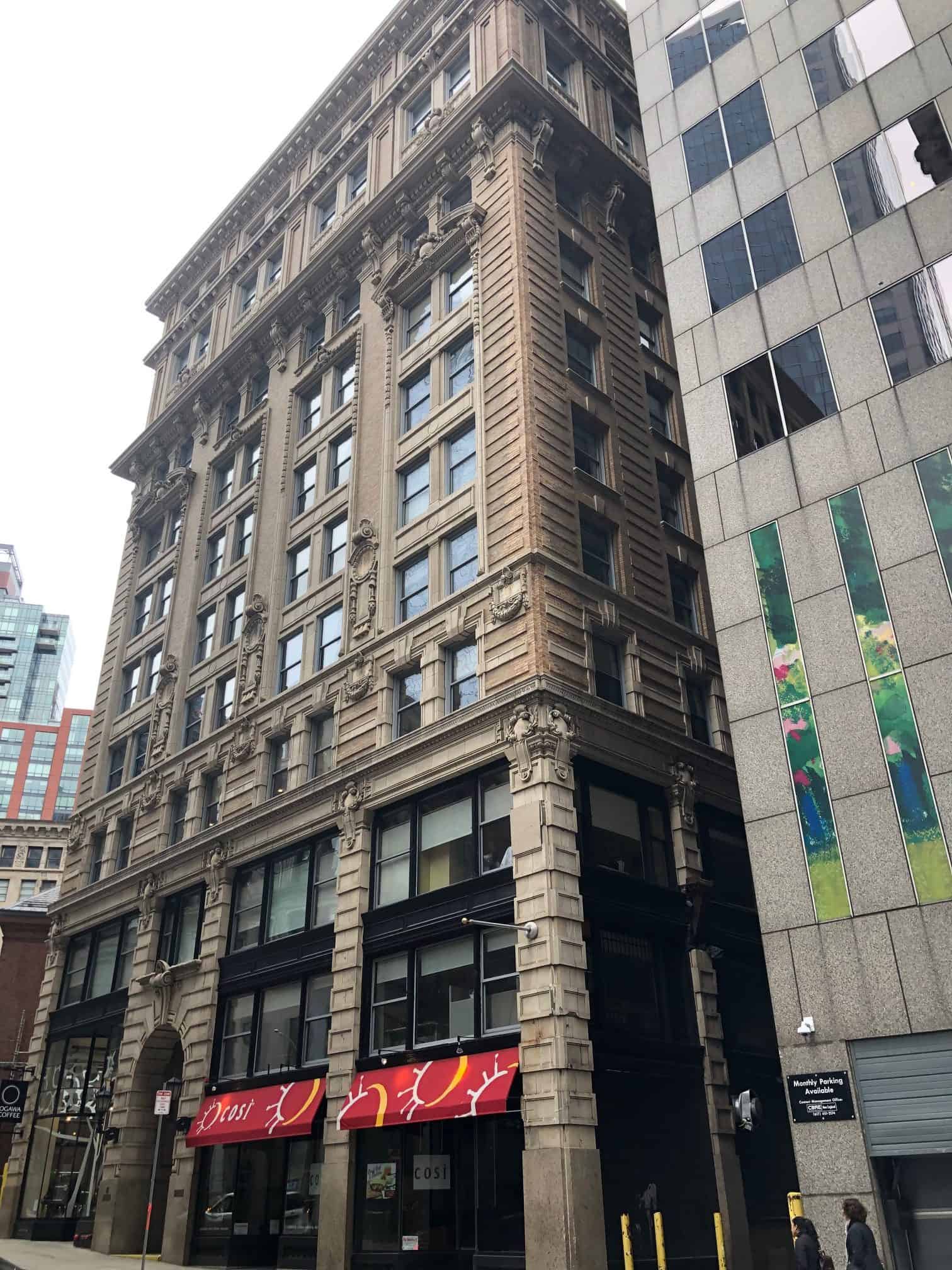 Phase 2 of the project,  March 2017 – March 2018, focused on the Milk Street building face and courtyard. This phase began with removing the ornamental four-foot terra cotta shelf on the ninth floor, and replacing it with GFRP (fiberglass) replicated to match the original appearance.

Importantly, it was determined through inspection that the terra cotta had deteriorated and was debonding from the building. Based on the engineer’s recommendation, it was decided to remove the entire terra cotta shelf to expose the structural steel, and then repair the structural steel, adding new steel framing and a pressure treated wood top. The finished appearance of the shelf was then replicated with GFRP panels to match the original shelf.

A significant complication of this phase was providing a mock-up of the shelf to the Landmarks Commission for approval of the appearance and color of the finished shelf.  The GFRP was mechanically anchored to the new plywood framing and the seams were sealed. Because the fiberglass surface was very smooth, it was necessary to anchor a series of snowguards on the surface to provide pedestrian safety from falling snow.

On the Milk Street side of the building, Abbot also replaced the right brick corner from the third to 10th floors, repaired the deteriorated steel, and replaced the brick to match the original color. Located next to this location is a modern office building whose loading platform abutted the work area.

To allow access to the loading platform while the work was ongoing, Abbot cantilevered over the platform to allow erection of the scaffolding. The corner and shelf was then removed and replaced as described above.

Phase 3,  March 2018 – January 2019,  involved the Washington Street building. This phase was extremely complicated due to heavy pedestrian traffic underneath. Here, Abbot built a structural walkway over the front of the building to cover the width of the sidewalk. The scaffolding was then erected on the face of the building above the structural walkway to the height of the terra cotta shelf.

A further complexity concerned erection of the portion of the scaffolding on the right side of the front elevation of the building, where the glass canopy that provided natural light over where the entrance to the State Street MBTA station was located. It was necessary to remove the masonry above the canopy and install structural steel to cantilever over the glass.

The steel provided a platform to protect the glass, and allowed erection of the scaffolding above the canopy to access the right side of the building. The 9th floor shelf was then removed and replaced as in Phase 2.