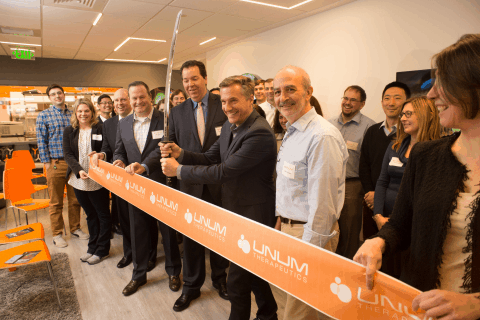 Unum Therapeutics is a company developing a universal cellular immunotherapy to treat multiple cancers. The company’s new office and laboratory facilities, located at 200 Cambridge Park Drive, were designed to help facilitate anticipated growth to more than 80 employees in the near future.

The new 33,000sf of space was designed specifically to foster continued collaboration, including state-of-the-art laboratories and an open office design. Employees can easily access the centrally located facility via public transportation at the Alewife Reservation (including access to the MBTA Red Line) and local highways, including Route 2 and Route 16.

“We believe that our ACTR technology platform fuels one of the industry’s most promising immunotherapy drug development programs,” said Chuck Wilson, PhD, president and CEO of Unum Therapeutics.

“To reach our full potential, we need to continue recruiting top-level talent. This move allows us to expand our hiring efforts within the world-class Cambridge life sciences hub, to house a larger team of scientists, and to continue to leverage our proximity to leading research and academic institutions and healthcare companies. Unum is excited to be joining a growing biotech community in West Cambridge.” continued Wilson.

Coming just a year after the company’s launch, this move follows several major milestones for Unum including initiation of a Phase 1 study in B-cell malignancies in Singapore, a $65M Series B financing, and a major strategic collaboration with Seattle Genetics. Unum evolved from the LabCentral incubator program in Kendall Square, where it was located prior to the Cambridge Drive facility.”

“I congratulate Unum Therapeutics on the opening of their new facility, and on the work they are doing to find new treatments and advancements in healthcare,” said Governor Baker. “I look forward to their continued contributions to job creation and innovation here in the Commonwealth.

“We are pleased to celebrate the grand opening of Unum’s new headquarters in Cambridge,” said Travis McCready, President & CEO of the Massachusetts Life Sciences Center. “This new facility will allow the company to continue to grow and make important contributions to cancer therapeutics, one of the core strengths of our Commonwealth’s life sciences ecosystem. The company’s growth is just one early return on the MLSC’s investment in the construction of LabCentral.”

“We are thrilled to celebrate Unum’s growth as a great example of the opportunity presented to companies in the Massachusetts ecosystem,” said Robert K. Coughlin, President & CEO of MassBio. “As a company with great science and great talent that has taken advantage of the efficiencies provided by an incubator and the network provided by active participation at MassBio, Unum has provided a clear path to success for other startups here.”