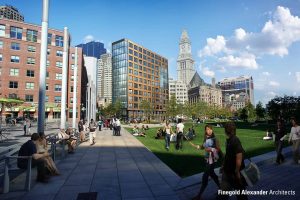 The Boulevard looking across the Greenway

Boston – Construction has begun at The Boulevard, Boston’s premiere luxury condominium project located on the Greenway at 110 Broad Street. As Boston’s luxury condo market continues to heat up, preconstruction sales are already under way. Finegold Alexander Architects, working for New Boston Ventures, is the architect for the building. 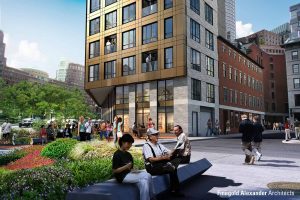 Street life at the Boulevard on the Greenway

The historic Bulfinch warehouse will be fully restored and re-imagined as the new residential lobby and amenity spaces. The ground floor of the new building will house a café with indoor and outdoor seating areas. In addition to providing a distinctive residential address, the development will extend the activity along the Greenway and preserve the historic view corridors along Broad, Wells, and India streets to the Boston waterfront.

The architectural design for this new residential project creates a visual link between the high-density business district, the varied texture of the Custom House Historic District, and the Rose Kennedy Greenway. The 12-story building will contain 36 residential units, 3,500sf of commercial space, and 48 underground parking spaces in a state-of-the-art automated garage system, totaling approximately 100,000sf.

The design goal is for the building to maintain its position as a notable landmark while also being heralded as a beacon of the future for buildings and residences along Boston’s Greenway. 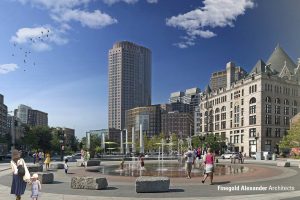 “The Boulevard is at the heart of everything in Boston,” said David Goldman, New Boston Ventures, “for play and for work, for restaurants, for entertainment. The North End is on one side, the Fort Point Channel is on the other; the waterfront is just outside the front door, and it backs up to the financial district and Quincy market.”

Dennis Kanin, principal, New Boston Ventures, added, “The building is breathtakingly designed. First-floor amenities are set within the historic Bulfinch warehouse, which will also house its lobby and entranceway, and an adjacent café will be in the new structure.”

Evening view of The Boulevard

The project speaks to Finegold Alexander Architect’s strengths, as the architectural team weaves a historic Bullfinch Building on the site, into the lobby and club room. “The Boulevard Project is exactly the kind of project that brings out our creative energies, combining a dramatic new residential design with one of the few remaining Bulfinch buildings,” said Tony Hsiao, principal and director of design at Finegold Alexander Architects. “These kinds of projects knit the city back together. The more we activate projects like this, the more we help to transform the city.”

Construction began in early 2016 with completion targeted for mid-2017

Interior at The Boulevard at 110 Broad Street, Boston penthouse