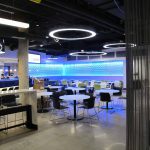 “The new dining facility is a model for other schools, that along with the recently renovated Hampshire Dining Common will be recognized as one of the best campus dining experiences in the country,” said UMBA Executive Director Patricia Filippone. “I would like to congratulate and thank our architectural firm Bruner/Cott and construction management team from Lee Kennedy and all who contributed their ideas and expertise to this project.” 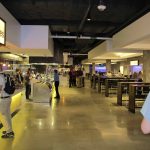 Students have 12 food stations to choose from.

Combining the spaces formerly occupied by the old Blue Wall and Burgers 101, the new 42,000 square foot design provides space for up to 900 patrons, a nearly 30 percent increase over the previous seating capacity of the Blue Wall. A new open layout will make it easier and faster for diners to order and pay for their meals. Individual registers at each dining station will alleviate the long waits and crowded atmosphere of the former Blue Wall, which struggled to accommodate the approximately 5,000 diners who visited daily.

Ken Toong, executive director of auxiliary enterprises, said, “This is the next generation of retail dining. We offer fresh, less-processed, just-in-time meals with local ingredients.”

Blue Wall is the second of UMass Amherst’s four dining facilities to be renovated. The Hampshire dining common reopened last August after undergoing a

$15.5 million renovation and has been awarded LEED Gold certification for energy efficiency and sustainability.

The school’s commitment to providing students with top-rate dining facilities has gained national recognition. The recent renovations have earned UMass Amherst the number two spot on Princeton Review’s 2015 edition of “The Best 379 Colleges,” for campus dining, where they ranked third the previous two years. The Princeton Review’s rankings of the top 20 schools in 62 categories are based on surveys of 130,000 students attending the colleges.

The UMass Building Authority is currently managing a $3.1 billion capital plan with more than 40 construction projects that will significantly improve teaching, learning and student life on all five campuses.  There are five major construction projects underway on the Amherst campus including the Champions Center,  Integrative Learning Center, McGuirk Alumni Stadium Upgrade and the South College Academic Facility. Working together with UMass President Robert L. Caret, the Board of Trustees, and the campuses UMBA strives to deliver the most cost-effective, highest quality construction of world-class buildings to support the mission of the University.