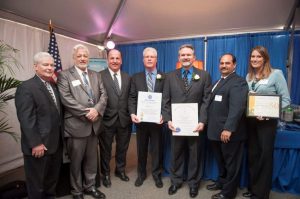 Avon, MA – Weiss Sheet Metal, a second-generation, privately held family business which provides customized metal fabrication work for architectural, commercial and residential use,recenlty celebrated its 50th anniversary in business with a special ceremony that took a look back, and also a look ahead.

Owners Wayne DeLano of Middleboro and cousin Brian DeLano of Easton are the second generation of DeLanos to operate this business, which was run by their fathers, George and Ralph DeLano. The elder DeLanos purchased the company a half century ago from European emigrants Jack Weiss and Eli Tappan.

The company celebrated its 50th anniversary under the DeLano ownership at a ceremony held at their location, 105 Bodwell Street, in the Avon Industrial Park, on April 24, from 2 to 5 p.m. at a ceremony that includes state, local and industry officials. The 50th anniversary included catered refreshments served to nearly 200 guests, and a power point presentation that showcased the history of the company and some of its earlier products. Among the highlights of the anniversary was a recorded interview with George and Ralph DeLano from 20 years ago. The business received official commendations for its contributions to the region and on the occasion of its 50th anniversary from the Massachusetts legislature, including State Representative William Galvin and State Senator Brian Joyce. Additionally, a number of Avon elected officials were on hand to congratulate the company for its growth and its anniversary.

Weiss Sheet Metal traces its roots to 1934, when Weiss and Tappan had started the metal shop company, with their first product being a commercial dishwasher under the Weiss name. Future owner George DeLano first went to work at the company, then based in Boston, in 1947 when he was 16 years old. His tenure there was interrupted by four years of military service but he returned to the company four years later. When the owners opted to put the company up for sale in the 1960s, DeLano and brother Ralph raised the $10,000 to meet the asking price that the founders sought.  The new owners kept the Weiss name because of its familiarity in the market.

The company’s work, as the dishwasher faded from the market, evolved toward other metalworking opportunities, including stainless steel equipment for the restaurant and laboratory industries. Early clients included Paramount Restaurant Equipment, Papa Gino’s, Silver Restaurant Supply, and Harbor Food Company.

Weiss Sheet Metal began at Roxbury Crossing in a small, 1,000-square-foot, building. Circumstances forced the company to relocate to Tremont Street in Boston to what was known as the Old Chicory Piano Building, when the Boston Redevelopment Agency required the company’s initial location for construction of a superhighway. In 1975, the owners purchased a 10,000-sq.-ft. building at 2570 Washington Street, Roxbury.

As the business continued to grow, they had the opportunity to build in a new industrial park in Avon and moved into their new 15,000 square foot facility at 210 Bodwell, in 1980. George’s son, Wayne, joined the business in 1979; and Ralph’s son, Brian, joined the family business in 1975.  As the business expanded, the cousins developed new customer networks and eventually became full partners.  In 2000, as the business expanded and they took on larger, more challenging projects (including the million-dollar-plus entrance canopy to Foxwoods Casino in Connecticut, the company outgrew its plant and moved to 105 Bodwell Street, its current home.

Today, the Weiss stainless steel products can be found in many Boston area restaurants, as well as hospitals, laboratories, the MBTA and Logan Airport. Additionally, the Weiss brand of sheet metal products has been used in Fenway Park, Yankee Stadium, the Hilton Hotel, and Harvard University. Additionally, the work of their skilled craftsman can also be seen at Julia Child’s kitchen in the Smithsonian Institute. Their current facility is 27,000 square feet.

“We are very pleased to have celebrated this anniversary,” said Wayne DeLano, partner, who added, “Brian and I have enjoyed expanding and continuing the business that our fathers got started. We think they would be pleased at the direction and outcome of where Weiss Sheet Metal has gone, and we are excited about the future.”