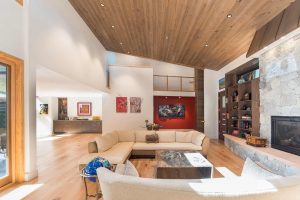 Boston – Visnick & Caulfield (VC), a firm of professionals specializing in providing interior design services in Boston, has been named a finalist in the Residential Design Over £1 Million category of the SBID International Design Awards 2019 in London.

The project, “Arcadia House,” was selected by the technical panel, followed by the judges, in the first two stages of the process. The judges decisions are then finalized by a third tier online public vote, where all finalists’ designs are judged by the public.

“Visnick & Caulfield is honored to be named a finalist by the judges of this prestigious international design award program. The Arcadia House embodies our design mantra on responding to human centric goals of comfort, function and wellbeing within an inspirational space,” states Burt Visnick, co-founder and principal architect at VC.

The SBID International Design Awards has firmly established itself as one of the most prestigious interior design awards in the global design calendar.

The SBID International Design Awards are awarded purely on the quality of the design, innovation, aesthetic and value-added to the project. Each entry undergoes an exhaustive two-tier judging process by panels of leading industry experts for both technical content and aesthetic creativity. Entries are then evaluated on their essential elements such as compliance with the brief, budget, health and safety and fit-for-purpose design. The public vote is the final tier of scoring; the public are invited to cast their votes for their favorite entries, as their votes will be counted toward the overall results.

The SBID Awards were recently accredited as the first interior design awards scheme to achieve GOLD standard by The Independent Awards Standards Council and were commended as “exemplar in how awards should be operated.”

The Residential Design Over £1 Million category focuses on design trends and the wow factors of residential projects with an overall value of over £1 million. Projects can include a single room, several rooms or a whole property.

Entries for this category were received from countries such as India, Australia, UAE, Italy, UK, Mexico, the United States and more.

Founder and CEO of SBID, Dr. Vanessa Brady OBE says, “The SBID International Design Awards continue to grow from strength to strength with more submissions received, more countries represented and this year we have an additional category.  It is known across the design industry as the premier design award to win and for that, we are quite rightly very proud to present it, as much as our entrants are to win it.”

Consistent in its quest to recognize, reward, and celebrate global interior design, this year’s edition is intended to be bigger and better than ever with the addition of SBID’s 10th anniversary celebrations and a captivating ceremony planned at the event’s new venue, Grosvenor House in London on October 25.

Public voting closed on September 9. The winners will be announced and awarded with a bespoke crystal trophy designed by Sans Souci Glass Deco. An overall winner will also be awarded for the project that gains the most votes overall from the judges’ choices and the public votes combined.

Judges this year include creative directors to the esteemed panel of judges from brands such as Nike, MAC Cosmetics, Universal Studios and the Solomon R. Guggenheim Museum and Foundation.

All winners and finalists will be featured in the Global Interior Design 2019 book which is distributed to over 1000 professionals across the globe and available to purchase on the SBID Awards website.