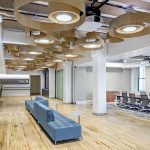 The project team worked closely on the renovation of a 40,000sf, two-floor space, located within a historic 19th century mill building in Boston’s Seaport District. Several features of the original mill design were prominently incorporated into the new office design aesthetics, such as exposing the original brick, columns, and beams that had been previously hidden behind layers of walls; incorporating the open ceiling plan; and restoring the original wood flooring. Vibrant colors were also incorporated throughout the office; glass dividers and doors, both colored and clear, were used to help define the offices and workspaces, creating a new functional space while pairing the traditional character of the 19th century building a contemporary aesthetic.

This project was designed for and received a utility rebate for lighting design efficiency. The newly renovated office included the design of open and private offices, conference rooms, an executive briefing center, restrooms, a small data center, and breakout areas.