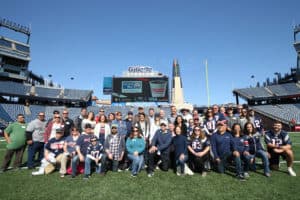 “Get on the Bus” supporters

Manchester, NH – September 2018 was the culmination of another successful “Get on the Bus” Stebbins Family Challenge Match for Granite United Way. Twenty-five new companies became corporate donors and earned a seat on the bus to a New England Patriots game at Gillette Stadium. It was a fitting conclusion to the Granite United Way (GUW) 2017/18 campaign that has added 50 companies in total and raised over $300,000 in the last two years.

Granite United Way is the result of six locations merging to create a single, efficient organization that covers more than 80% of New Hampshire and Windsor County, Vermont. United Way campaigns provide an opportunity for businesses and their employees to make a positive impact on their community and serve a greater cause together. 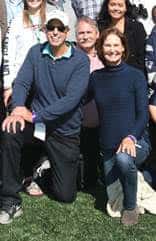 Mark and Sally Stebbins (front) with the new corporate donors

To be eligible for the Stebbins Challenge Match, each corporate donor either hosted a new workplace campaign or pledged a new corporate gift of $2,500 or more, which was matched by the Stebbins family up to $50,000. All of the qualified donors received a complimentary pair of tickets to “Get on the Bus” for a Patriots game at Gillette Stadium.

As Granite United Way Pacesetters, the Stebbins’ commitment to GUW communities starts with their own company, PROCON. Each year, the firm hosts a workplace kick-off event where members of the GUW community share how their lives are impacted by donation dollars. This year’s workplace fundraiser generated over $83,000 that included 28 leadership donors of $1,000 or more and many loyal contributors of 10-plus years. Also, all the employee donations were matched by PROCON, doubling their positive impact.

Philanthropy is embedded in the Stebbins family going back two generations to Mark Stebbins’ grandfather, Blanchard Stebbins. “Our parents instilled in us the importance of giving back to the community, and we always want to encourage others to do the same,” remarked Stebbins. Historically, the Stebbins family has supported GUW through personal contributions, corporate fundraisers and challenge matches for over 60 years.

“The generosity and commitment that Mark and Sally Stebbins have shown our community is incredible. They have been long-time supporters of Granite United Way and have inspired countless individuals and corporate partners to help tackle some of our region’s greatest challenges,” said Patrick Tufts, president and CEO of Granite United Way.

“The football game is a great incentive for partners to give since it occurs at the start of another campaign season. This challenge match has resulted in over $300,000 in new UW dollars over the last two years including the Stebbins’ generous match.” said Nichole Martin Reimer Vice President of Workplace Giving at GUW.

Sally Stebbins declared, “This year’s campaign was incredibly successful and our best ever. We are truly grateful for every dollar contributed by everyone involved. Their generosity will bring many resources to those less fortunate in our community.”