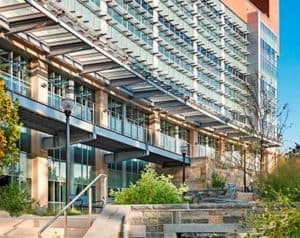 The five-story 310,000sf Life Science Laboratories building is designed to foster collaboration among faculty and student researchers in biology, environmental science, physics, chemistry, and other sciences. It also employs a range of advanced measures to slash energy usage, carbon emissions, and related costs. 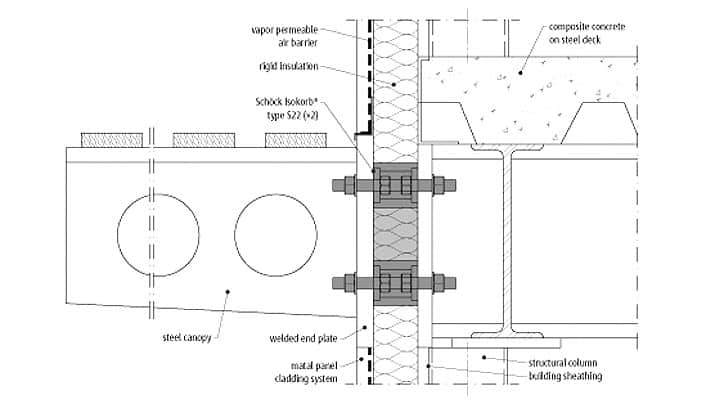 Construction of the Life Science Laboratories building began in 2011 and was completed in 2013. Currently, the building houses 64 faculty, 512 student researchers, and 37 staff. However, it was designed for flexibility to reconfigure interior spaces to accommodate changes in direction of scientific research and in staffing.

With the energy-saving technologies in place, including structural thermal breaks for the canopy support structure, the lab saves approximately $300,000 in energy costs per year, which bears out the energy modeling that Wilson Architects conducted at the project’s outset. As the building systems are constantly monitored for energy usage, savings were documented to the extent that, in 2015, the building achieved LEED Gold certification. 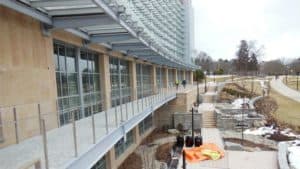 Sustainability is especially challenging for a research facility, which typically consumes more energy than comparable buildings due in part to ventilation systems that draw large volumes of interior air through fume hoods and expel it into the atmosphere.

An additional energy-saving strategy was required to mitigate the potential of thermal bridging through steel beams that penetrated the insulated building envelope to support a 300-ft. glass canopy spanning the length of the building’s façade.

Architect Kevin Triplett of Wilson Architects Inc. explained, “We designed an elevated exterior walkway to make it easier for occupants to traverse the length of the building and, in particular, to provide handicapped individuals with easier access to entry points. To protect everyone using this external walkway from the elements, we built a glass canopy overhead, supported by multiple steel beams that cantilever from the building.”

However, exterior steel cantilevers supported by interior structural steel would cause interior heat to be conducted through the cantilevers and dissipated into the environment, requiring steel-to-steel insulation in the form of structural thermal breaks, or STBs. 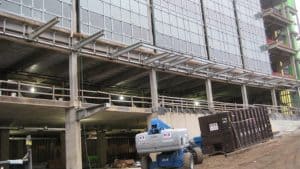 “Lim Consultants recommended that we install the S22 thermal breaks for steel construction to prevent thermal bridging,” Triplett said. “At the time, the product and technology were relatively new to us, but Schöck had fully tested its system and established a track record of success in Europe. Plus, they provided any technical support we needed.”

According to Triplett, it is difficult to calculate how much of the total savings accrued from the structural thermal breaks, because they were not separately metered and monitored. However, he says they contributed significantly to the savings.

He adds, “They also prevent the interior side of the penetration from becoming cold enough to form condensation, which can rust steel structures.  Condensation can also support mold growth on adjacent surfaces, potentially affecting the health of occupants as well as the work done in the labs. That’s a problem which is difficult, if not impossible, to go back and try to fix.  The STBs prevent condensation and contribute toward making the building sustainable for the long term. It’s a relatively small investment that yields big returns.”