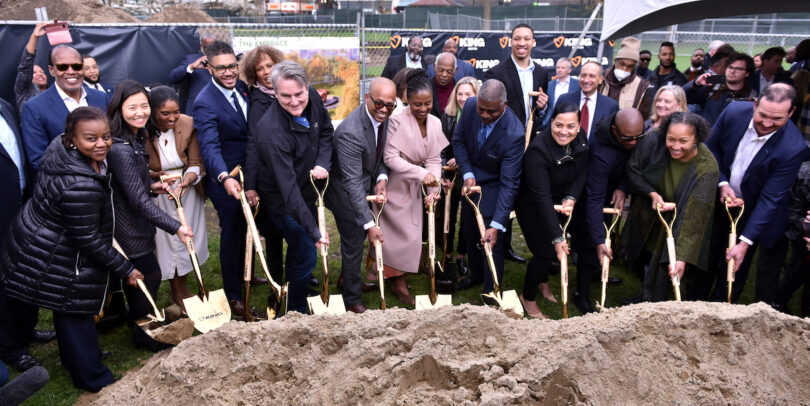 King Boston, along with community members and partners, officially broke ground on the site of "The Embrace" memorial on the Boston Common. / Photos by Craig Bailey 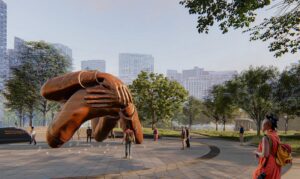 Rendering of “The Embrace” monument

The 22-foot-high monument, The Embrace, was inspired by a photograph of Dr. and Mrs. King’s entwined arms in the moments after Dr. King learned he had won the 1964 Nobel Peace Prize. Designed by Hank Willis Thomas and Mass Design Group, the monument will be set on Boston Common, America’s first public park, linking the Common’s 400-year history as a gathering space to the age of a “New Boston” rooted in equity, healing, and well-being. The Embrace will be the centerpiece of the 1965 Freedom Plaza, where King Boston will highlight 65 of Greater Boston’s leaders during the civil rights movement, and it is scheduled to be unveiled on Martin Luther King weekend in 2023. 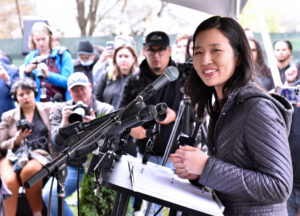 Boston Mayor Michelle Wu emphasized the importance of the memorial as a marker of a bold new vision for Boston and its inclusivity.

The groundbreaking, which took place on the 95th anniversary of Coretta Scott King’s birth, featured a number of speakers addressing the importance of the memorial as a symbol of a Boston transformed, and recognized as an inclusive, welcoming, and anti-racist city as it moves toward its 400th anniversary in 2030. The sculpture is also situated just yards from Parkman Bandstand, where Dr. King addressed a large crowd after his historic march in April 1965 from Roxbury to the Common. 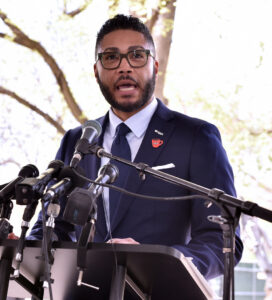 Imari Paris Jeffries gave an introduction at the groundbreaking ceremony.

“The Embrace will be an important cultural symbol of equity and justice for Boston residents and all those who visit our city and region,” said Jeffries. “It will serve as a permanent monument representing the Kings’ time and powerful presence here in Boston, a time that helped shape their approach to an equitable society. This monument, and the tribute to 65 other civil rights icons, are critical elements of King Boston’s spatial justice efforts and will advance our collective work toward a ‘New Boston.’”

The Embrace design was chosen from a field of more than 100 entries, with input from a distinguished panel of Boston leaders in the arts and a public voting process. 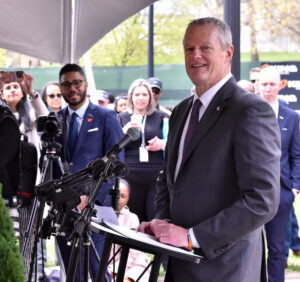 Massachusetts Governor Charlie Baker addressed the significance of the memorial to the rest of the Commonwealth and all those who visit.

“This is an amazing amalgamation of people’s love for humanity, love for the possibility of what can be and what can happen when we work together,” said Thomas. “Thank you for participating in this moment of civic joy with us.”