by Mark Reed and Stephanie Goldberg 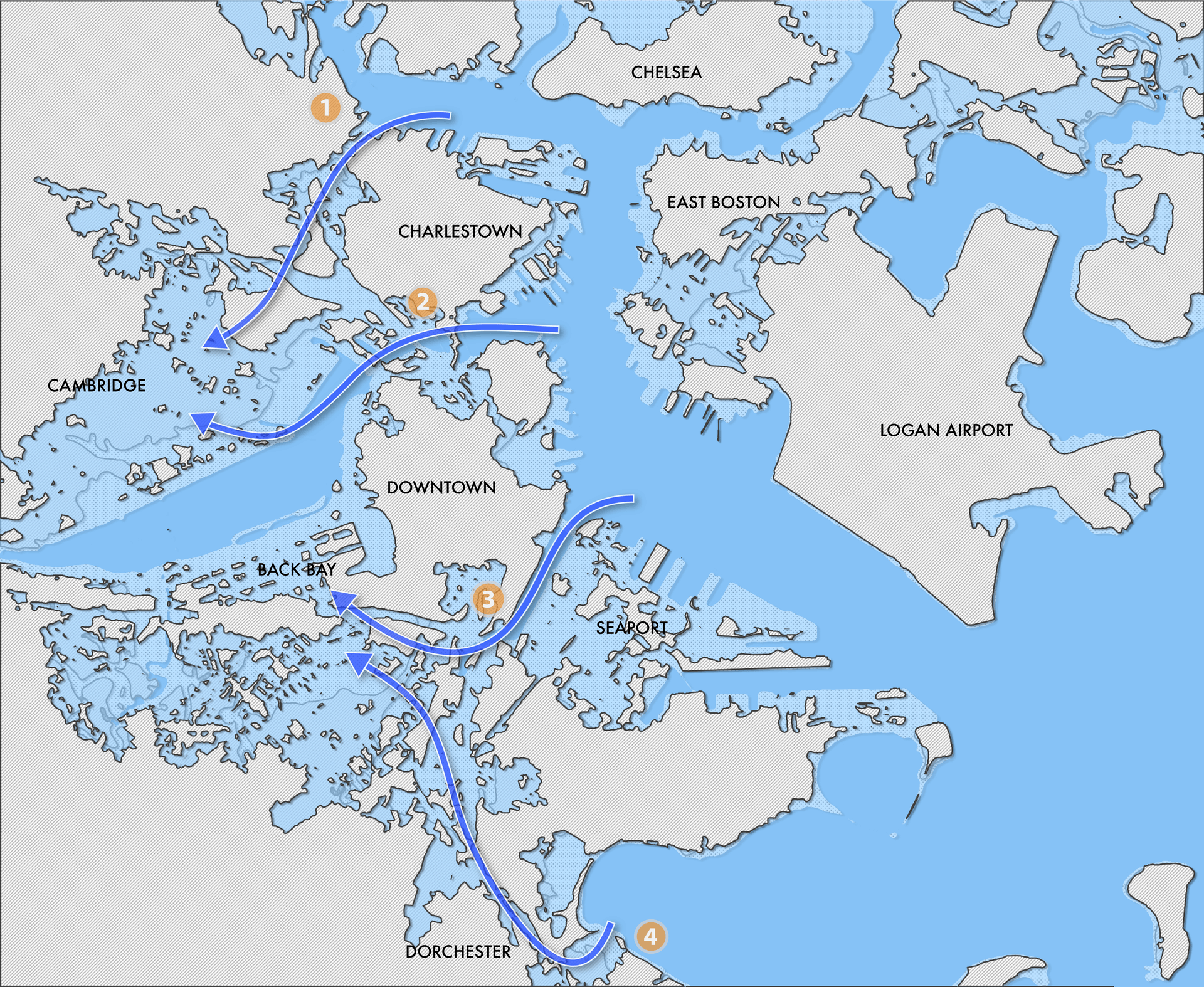 Facing the Charles River from MIT’s iconic dome, it is hard to imagine that the sea, more than two miles away, could submerge the campus in the next 100 years. It is easy to envision the river flooding, but few realize the actual threat to Cambridge lies in Boston’s original peninsular landforms and the ocean beyond.

According the NOAA (the National Oceanic and Atmospheric Administration), global sea levels could rise by up to six feet by 2100, only 80 years from now. Boston Harbor is more susceptible to sea level rise than almost any other U.S. city. NOAA’s map simulating a five foot rise demonstrates the pathways that most threaten Cambridge (figure 1). 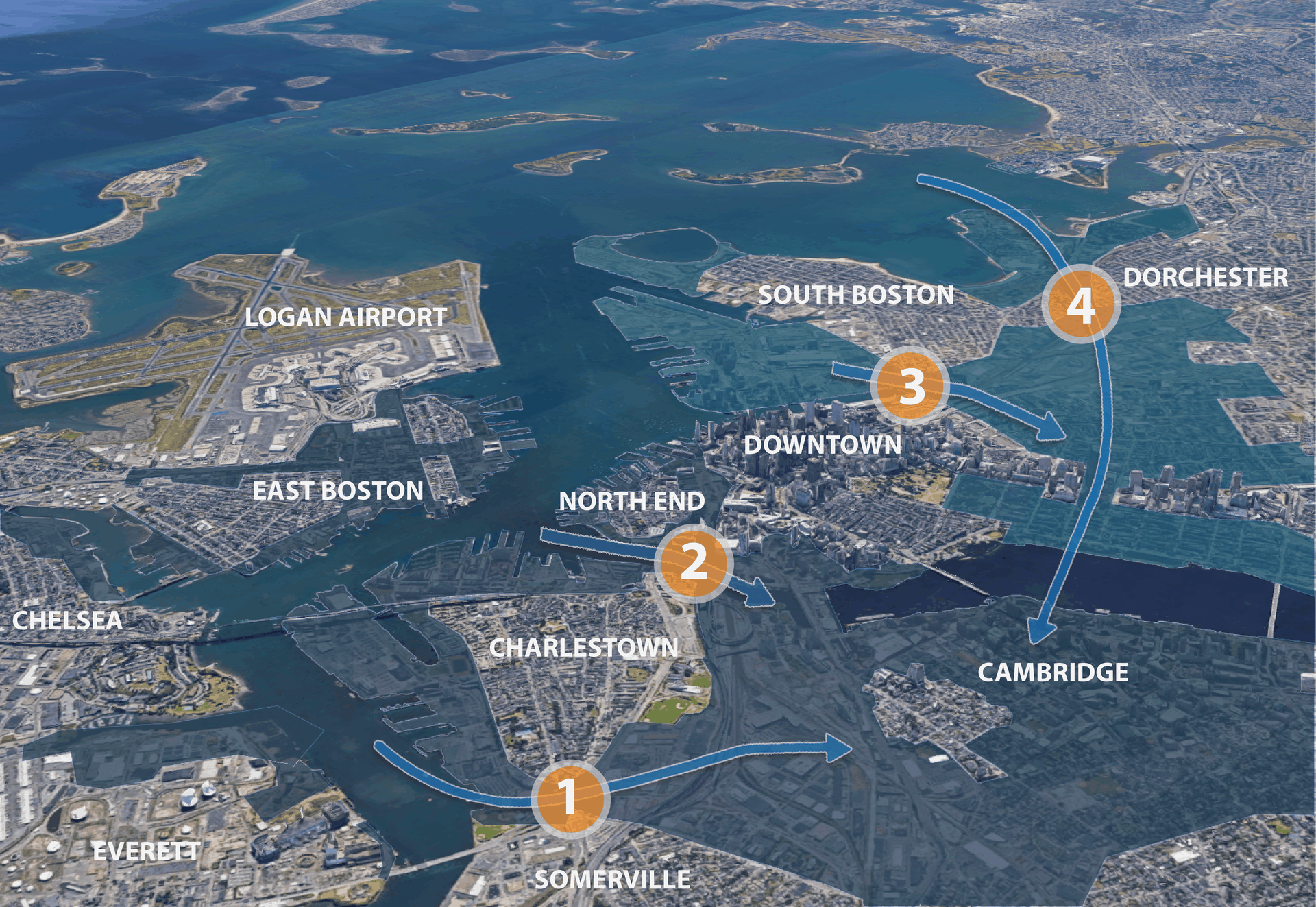 Zooming out from Cambridge, the problem becomes evident at an urban scale (figure 2). With a five foot sea level rise, four flow-ways in Boston will allow free passage of ocean water into the Charles River and the neighborhoods that touch it. These are: 1) the Charlestown Flow, 2) the North End Flow, 3) the South Boston Flow, and 4) the Dorchester Flow. We have named these after Boston neighborhoods to emphasize that each originates in Boston, and are coincident with the low lying necks of the original landforms of the 1600s (figure 3). Unlike floods, these flows do not recede. 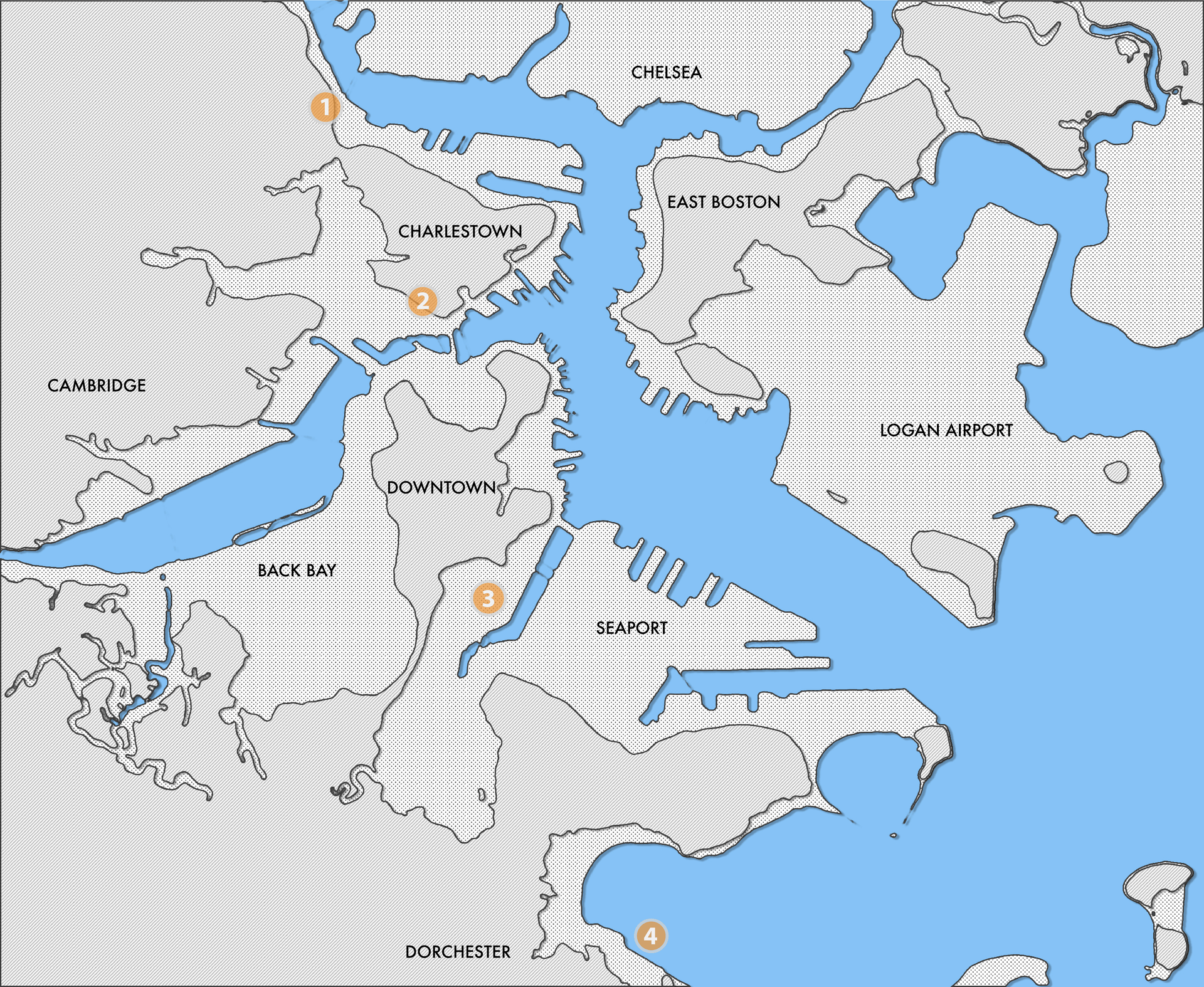 Fortunately for Cambridge, “plugging” these lowlands of the peninsulas could be achieved with four discrete, but complex, projects. As Figure 4 shows, only small stretches of Boston land need to be fortified to protect the entire city of Cambridge.

These projects prompt interesting questions. Does Boston have a responsibility to collaborate to protect Cambridge? What should Harvard, MIT, and the large land owners in Cambridge do to ensure that their investments are secure? With billions of dollars of assets at risk, Cambridge may need to work with, and share costs with Boston to address vulnerabilities. 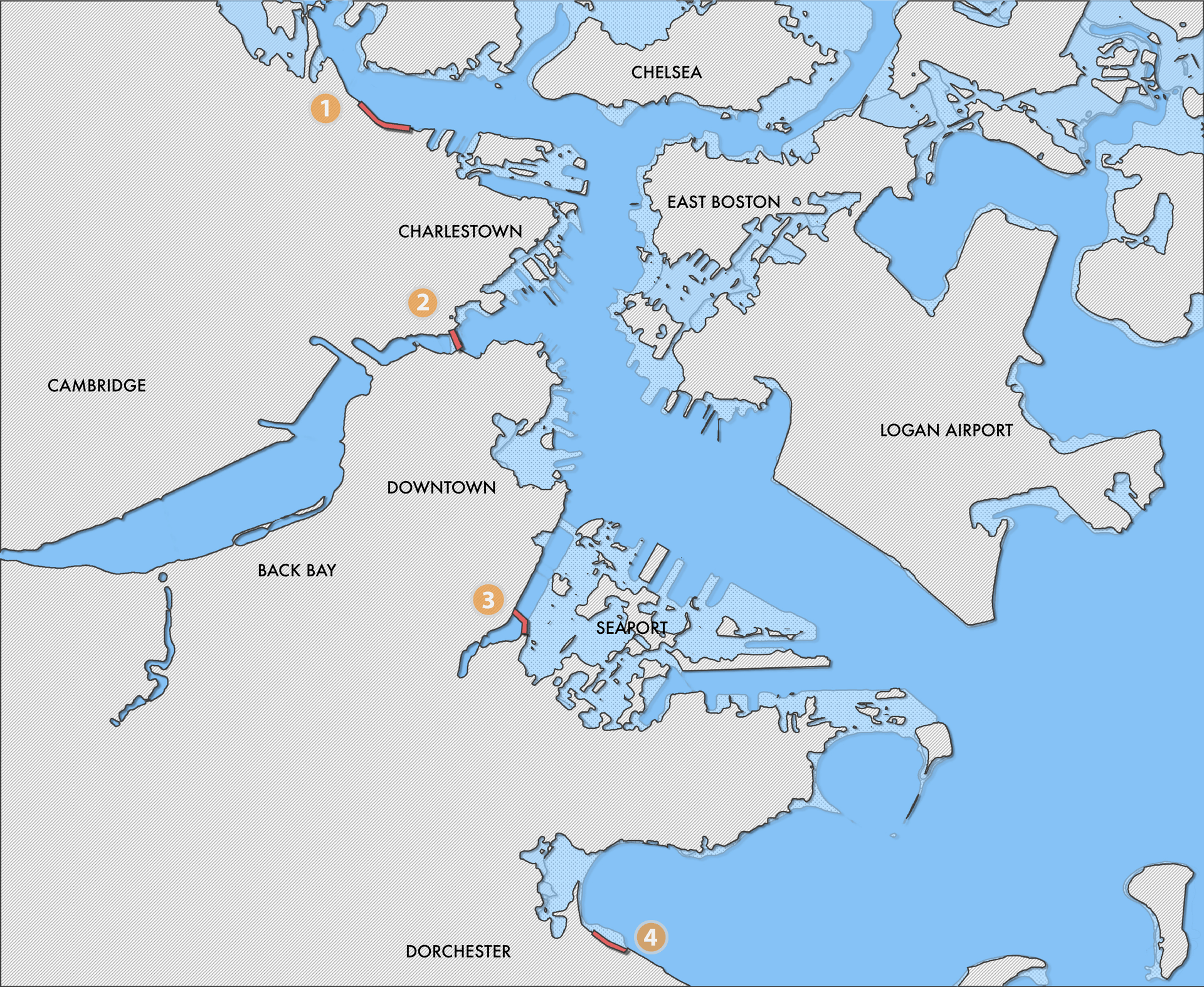 Figure 4: Map showing four areas of Boston that could be fortified to protect flooding in Cambridge and the Back Bay. / LAB LSA, Cody Uliasz.

A holistic approach to civil engineering and urban planning involving Boston, Cambridge, and the major stakeholders is needed to address sea level rise. Actionable projects can be identified and prioritized, with budgets and schedules. These projects are complex, disruptive and costly, likely needing years to plan and execute. This study demonstrates our interconnectivity, and brings to the fore the regional collaboration that will be essential in the years to come as the entire metro area grapples with questions of climate change and our built future. 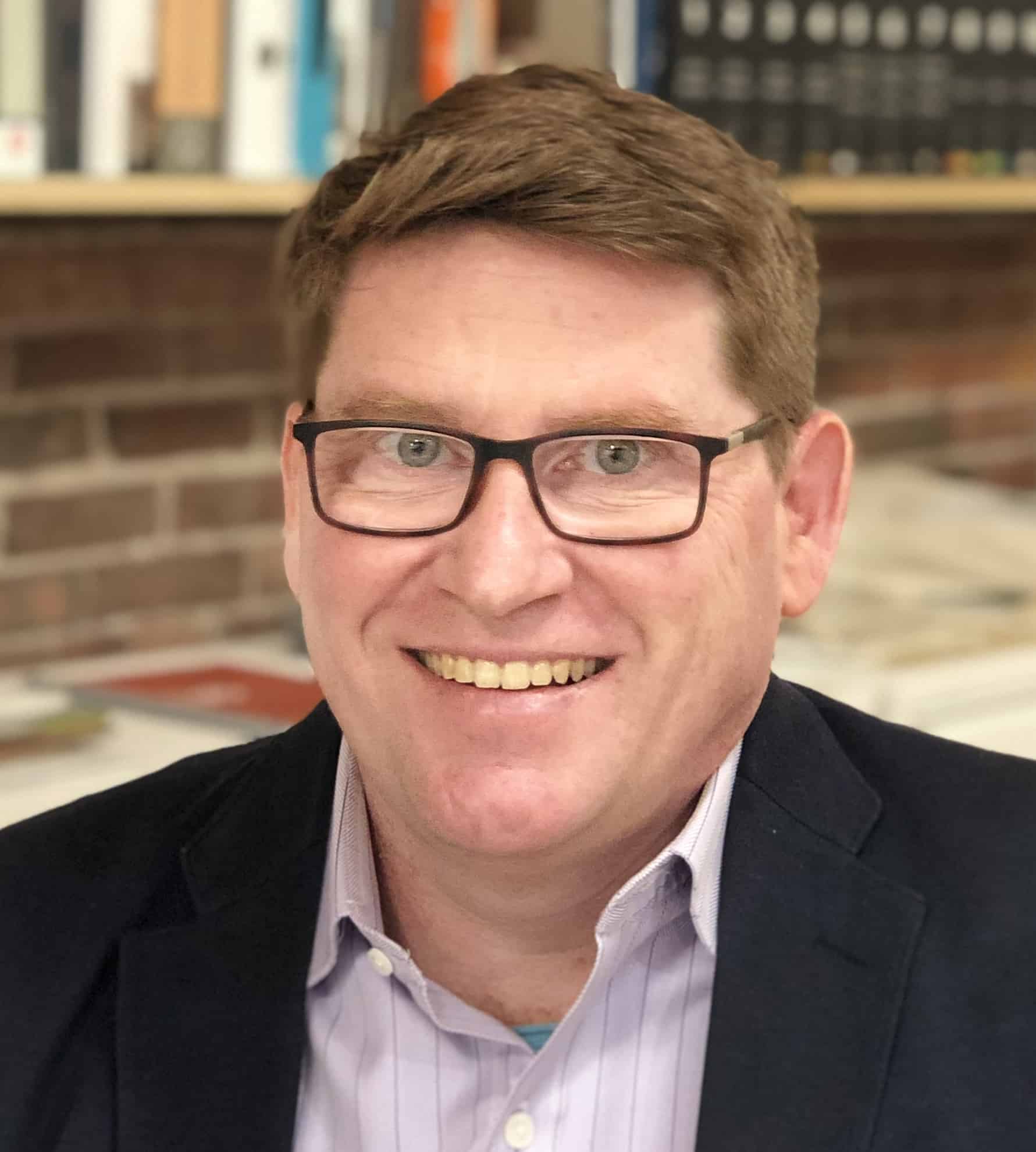 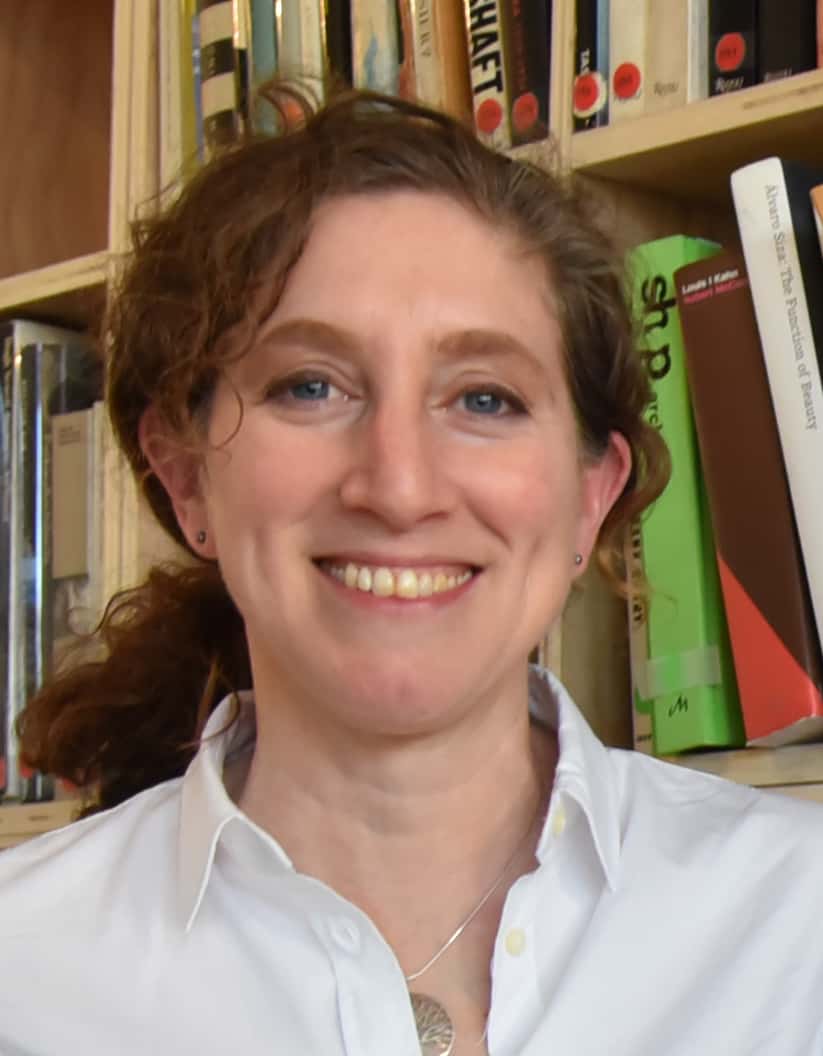