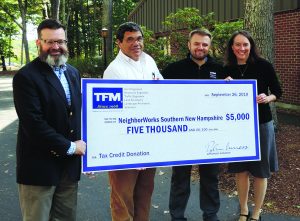 Manchester, NH – TFMoran has donated $5,000 to NeighborWorks – Southern New Hampshire in support of West Side RENEW, an initiative to redevelop and preserve properties in significant decline or in need of capital improvements on Manchester’s West Side.

West Side RENEW complements NeighborWorks Southern New Hampshire’s overarching community building mission in this area of Manchester, which began in 2006 with the West Granite Revitalization Initiative. The initiative resulted in more than $5 million in investment over nine years to increase the home ownership rate, expand the number of owner occupied multi-family properties, and reduce neighborhood density.

The current effort continues NeighborWorks Southern New Hampshire’s focus on eliminating or redeveloping dilapidated or problem properties in the area and increasing the number of affordable rental units.