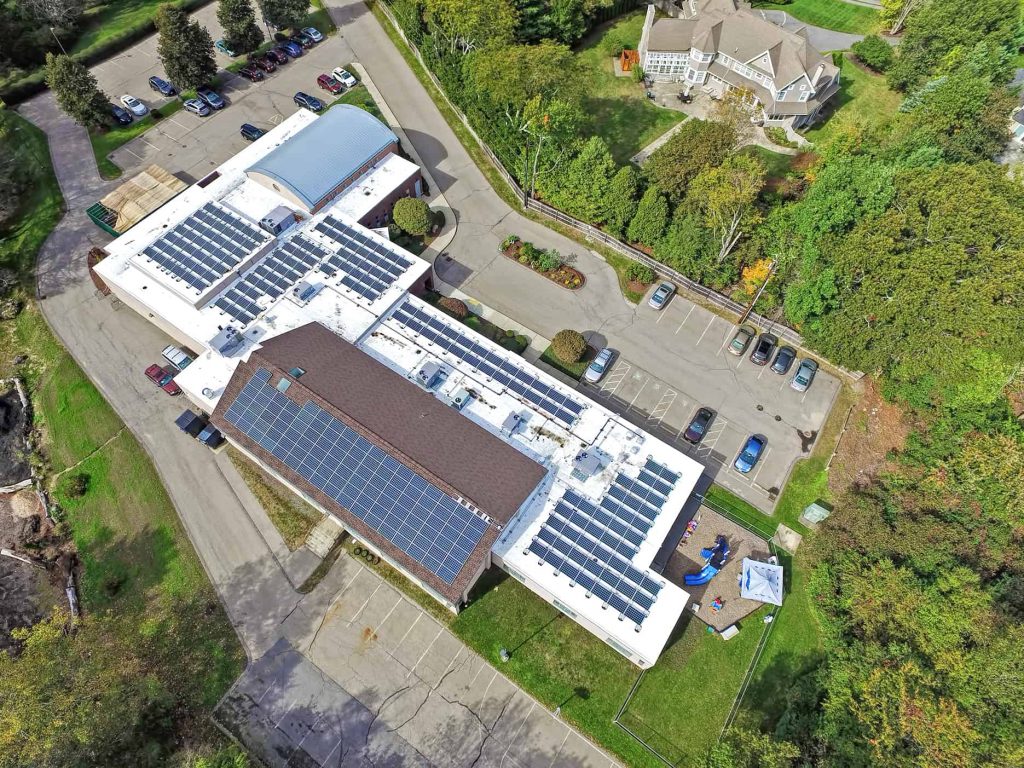 Needham, MA – Temple Aliyah, an egalitarian Conservative congregation, has partnered with Solect Energy, a Massachusetts based commercial-scale installer of solar energy systems, and PowerOptions, an energy buying consortium based in the Northeast, to install an 81 kilowatt (kW) solar energy system on the synagogue’s roof. The solar array consists of 265 photovoltaic (PV) panels and is expected to produce 85,170 kilowatt hours (kwH) of energy annually. The power generated will cover 92 percent of the synagogue’s energy needs. It is projected that Temple Aliyah will save approximately $6,600 in energy expenses in the first year, and nearly $245,000 over the course of 20 years.

The synagogue’s new solar energy system came to fruition through Solect’s partnership with PowerOptions, which selected Solect as the developer for its small systems solar program. Temple Aliyah has been a member of PowerOptions’ energy buying consortium for several years. When it became clear that the synagogue would pursue solar energy, they again looked to PowerOptions for assistance. Temple Aliyah was able to pursue a Power Purchase Agreement (PPA) through PowerOptions’ solar program with Solect Energy. Under the terms of the PPA, Solect owns the synagogue’s system, covering the costs of procuring, installing, operating and maintaining it. Solect then sells the synagogue electricity generated by the array at a substantially reduced, fixed rate — saving Temple Aliyah thousands of dollars each year.

“Temple Aliyah is always looking for opportunities to reduce the synagogue’s carbon footprint and to reduce operational costs,” said Fred Borgenicht, Temple Aliyah’s Vice President of Operations. “Installing solar panels through the PowerOptions program was a no-brainer since they had already done the hard work of conducting a competitive solicitation for the best deal and negotiated the pricing and contract terms.”

“At Temple Aliyah, we are focused on making a better future for our community, both large and small,” said David Farbman, Temple Aliyah President. “We believe that by significantly reducing our carbon footprint by hosting one of the largest solar arrays of any house of worship in the state, we are helping both our synagogue and our wider world at the same time.”

“Temple Aliyah turned to solar to substantially reduce their operating costs,” said Alex Keally, Partner and SVP of Business Operations at Solect Energy. “The Synagogue’s flat roof made it ideal for installing a large array that could generate 90+ percent of their electricity needs. We applaud the synagogue’s leadership on their move to solar, and for now having the distinction of hosting one of the largest solar systems on a house of worship in the state of Massachusetts.”

Said Rabbi Carl Perkins, “Our tradition teaches us that we have a duty ‘to till and to tend’ the precious world which is our collective home. That implies that we must seek to conserve natural resources, including energy. By capturing some of the energy contained in the sunlight falling on our property, we are making progress in our quest to be faithful stewards of this precious collective home which has been entrusted to us.”

“At PowerOptions, our mission is to save nonprofit organizations time and money, so they can focus resources on pursuing their own important missions,“ said PowerOptions President and CEO Cynthia Arcate. “Temple Aliyah’s congregation benefits from cleaner, renewable energy and lower energy costs.”