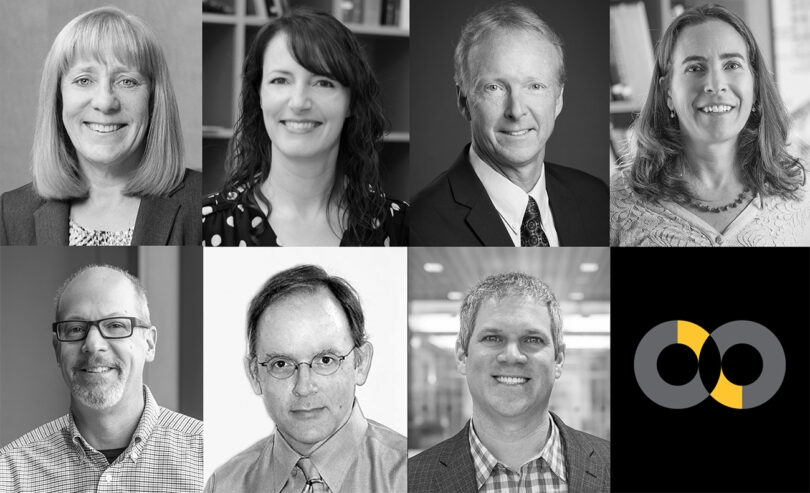 Bennett is a civil engineer with more than 30 years of experience, serving as civil engineer of record, design partner project manager and LEED contributor on government, higher education, entertainment and site infrastructure projects, overseeing design and construction of utilities, stormwater management systems and roadways. A licensed professional engineer in 18 states, she has worked with local, state and federal agencies across the country.

Caisse joined SLAM in 2005 and is a registered architect, serving as a designer and healthcare planner who manages and provides technical expertise for the firm’s national healthcare and medical education projects.  In 2019, she received an Excellence in Mentoring Award from PWC-CT.  Caisse is a member of the American Institute of Architects and has also achieved Evidence-Based Design Accreditation and Certification.

Infelt is an architect with more than 35 years of experience as a healthcare programmer, planner and designer, where his responsibilities include mentoring the firm’s intern architects. His approach of working in close collaboration with his clients is an integrated process weaving together the disciplines of programming, planning, and design, to create healing and innovative environments for more than 400 healthcare facilities nationwide and internationally.

Samuelson has been a member of the SLAM team for 25 years and serves as a project architect and project manager, bringing an expertise in higher education and public/independent education facilities of all types. She was recently named to the Studio Core Team Leadership as the Management and Human Resources Leader. Samuelson manages notable complex projects, overseeing large teams from planning through design and construction.

Schaefer has been a member of the SLAM team for 22 years. He currently serves as Director of Quality Assurance & Control (QAQC), leading the development and implementation of SLAM’s QA/QC process, the development of SLAM standards/best practices, and performing project QC reviews firmwide. As one of SLAM’s technical leaders, he serves as a resource in matters including documentation, codes, sustainability, construction administration and Revit.

Smith has more than 35 years of experience as a design architect, serving a broad range of industry sectors, including the firm’s Healthcare and Sports Studio. His portfolio includes serving as design lead for the Olympic Stadium in Atlanta and its post-Olympic conversion to Turner Field, as well as lead of the exterior envelope development team for the University of Iowa Stead Family Children’s Hospital.

Caisse actively attends national conferences and has presented about patient-centered care at the Planetree International Conference. Her leadership skills extend outside of the firm, serving local organizations, as Director on the Board of Professional Women in Construction’s CT Chapter (PWC-CT) and as chairperson of the Mentorship Committee providing opportunities for students interested in pursuing careers within the architecture, engineering, and construction industries. She holds a Bachelor of Architecture and Bachelor of Arts in foreign language from Roger Williams University.

Prior to Schaefer’s current role, he was a project architect who managed the documentation, specifications, code analysis, engineering coordination and construction administration on complex educational facilities. On the University of Notre Dame Campus Crossroads Project, he led the development of a unique masonry facade support technique for the new additions, including documentation and coordination. He holds an associate in science – architectural engineering degree from Wentworth Institute of Technology.

Smith worked on the recently complete Doylestown Hospital addition and renovation in Doylestown, Pa. He has presented on healthcare design topics at the ASHE Seattle Conference and AIA Iowa State Chapter Annual Convention. Smith is a member of the American Institute of Architects and holds a Master of Architecture from Princeton University and a Bachelor of Science – Architecture from the University of Virginia. He is proud of his long-standing commitment as juror of student architectural projects at Kennesaw State University since 2004.