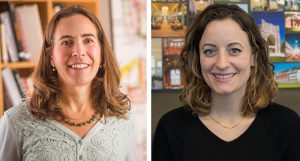 Glastonbury, CT – The S/L/A/M Collaborative (SLAM)  announced that senior associate, Amy Samuelson, AIA, LEED AP has been named the 2019 Designer of the Year by the Associated General Contractors (AGC) of Connecticut.

The award recognizes exceptional achievements of prominent Connecticut commercial construction professionals over the course of their careers.

Samuelson has more than 25 years of experience as a project architect and manager with an expertise in education facilities of all types.  She was recently promoted to SLAM’s Studio Core Team Leadership as the management and human resources leader.

She has managed numerous complex projects, overseeing large teams from planning through design and construction. Her portfolio of work comprises notable public/independent/higher education projects for SLAM.

Emily Ky, AIA, an associate, is the 2019 recipient of the AIA Connecticut Emerging Professional Merit Award.  The award recognizes emerging graduate architects who have made outstanding contributions to their profession or have rendered distinguished service in the public realm.

She is the co-chair of the AIA Connecticut Women in Architecture committee and recently moderated a panel discussion at the 2019 AIA Connecticut Leadership Summit on Equity and the Future of the Firm.

In the public education sector, Samuelson managed teams through transformative renovations of East Hampton High School and Nonnewaug High School, achieving 21st Century learning environments. At East Hampton, she oversaw implementation of the first-ever Team-based Learning (TBL) classroom to be offered in a Connecticut High School. In the higher education market, Amy currently supports Sacred Heart University in Fairfield, Conn., in its initiative to create and transform a new campus quad, where she has managed the roll-out of a five-story Toussaint Hall and is currently overseeing the construction of twin apartment residences and three new mixed-housing styles.

Ky supports SLAM’s education studio, contributing to the design and documentation of large-scale higher education projects. She is currently leading the construction administration on the University of Iowa Pharmacy Building, a 250,000sf project. She has developed a personal and professional interest and commitment to sustainability and has contributed to the compilation of SLAM’s reporting data for the AIA 2030 Commitment.