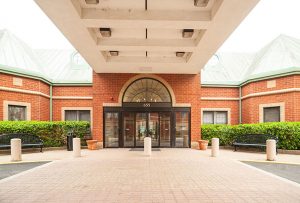 Five Star Premier Residences of Teaneck is a resort-style, senior living community consisting of two five-story towers connected by a one-story center building. The project is a redevelopment of the existing 88,000sf of occupied space and will include the installation of new ceilings, floors and millwork, as well as new work in residence rooms.

“This is an occupied living facility, so there will be quite a bit of coordination on working with our subcontractors as well as staff and management to ensure that all residents are able to continue on with normal routines with construction going on. We will be phasing out the work in this project to ensure that everyone is going to be able to be accommodated in their living situations,” said Tom Quinlan, president of South Coast Improvement Company.

The project will consist of phased construction and will remain occupied during its duration.  Completion is anticipated in early 2021.

The project architect is Perkins Eastman of Chicago. The project engineer is the Princeton Engineering Group of Princeton, N.J., and Harrison Hamnett of Pennington, N.J. is an additional engineer.

Five Star Premier Residences of Teaneck is an award-winning community offering the finest in independent living and assisted living apartments, as well as respite/short stays, all together in an elegantly furnished location surrounded by beautifully landscaped grounds and a highly skilled 24-hour staff.

Five Star Premier Residences of Teaneck was deemed the No. 1 “Reader’s Choice” for Retirement Community and Independent Living Community by the readers of the “Jewish Standard” in 2013, 2014 and 2015.