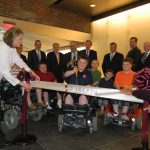 Sarepta is the global leader in the development of phosphorodiamidate morpholino oligomer (PMO) chemistries for RNA therapeutics, and the company’s lead drug candidate, eteplirsen, is designed to address the underlying cause of DMD. The company is also developing several additional clinical candidates for rare and infectious diseases and continues to advance its PMO technology platform.

Chris Garabedian, president and chief executive officer of Sarepta Therapeutics, said, “Operating in Cambridge provides us with access to the region’s world-class bio-pharmaceutical talent, major academic medical centers and hospitals, and industry leaders in the RNA and rare disease fields. This access to talent and resources is critical as we develop our lead drug candidate, eteplirsen, for the treatment of DMD.”

The milestone completes the relocation of Sarepta’s headquarter operations to Cambridge, a process that began in early 2013. Since the relocation began, Sarepta has rapidly grown to approximately 160 employees, with nearly 90 based in Cambridge.

In addition, Sarepta recently announced an agreement to acquire a 60,000sf  multifunctional manufacturing facility on 26 acres of land in Andover, further expanding the company’s in-state operations. The company anticipates continued growth in its employee base at these two Massachusetts locations over the next year.

The company also has operations at a facility in Corvallis, Ore., focused on research, manufacturing and other support functions.

“On behalf of the Center, I would like to extend our warmest congratulations to Sarepta Therapeutics as the company officially opens its global headquarters in Cambridge,” said Susan Windham Bannister, Ph.D., president and chief executive officer of the Massachusetts Life Sciences Center, the agency charged with implementing Governor Patrick’s 10-year, $1 billion Life Sciences Initiative. “Sarepta has grown exponentially here in Massachusetts, and we look forward to partnering with the company to support its future growth.