The first in a three-part series on what is missing when children are “learning virtually.” 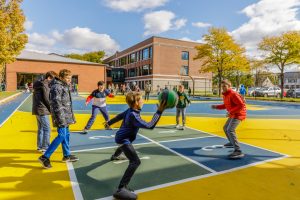 This spring, the nation engaged in a great, unplanned experiment. There were no carefully selected control groups, there was minimal planning time, and the subjects of the experiment had no voice. That experiment was remote schooling. Those tasked with leading this experiment – teachers and school leadership – additionally had little voice in the decisions, and their toolkits and budgets were often ill-equipped to handle such a major change.

The four of us are mothers who ordinarily spend our days designing spaces – including those for K-12 education, leading a firm of designers, and working to market the work of the firm. Our children range in age from just turned 8 to 14, six in total. Of the six, one is a girl, the rest are boys. Four are enrolled in independent schools, two in public schools. We do not seek here to come to a grand conclusion about this experiment, but rather to relate our own experiences with remote learning and what they have taught us about what was lost when our children left their school buildings and entered our homes to complete the school year virtually. 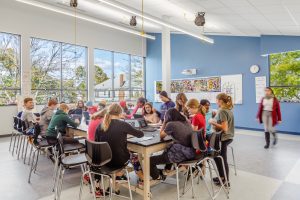 I have two boys who are 9 and 14 and the pandemic has given me insight into the way that they see the world and operate within it. The 9-year-old is constantly in motion, except when he is reading, and he socializes by ‘doing’ with others. We tried zoom playdates and I feared for the safety of the iPads as the kids ran around their respective houses. We even tried zoom babysitting and I would hear the babysitter calling out because she had gotten left in another room while the science experiment was being constructed. We are fortunate to live in a tight-knit neighborhood where the kids match up in age and the cars need to drive slowly for fear of breaking an axel. Our values and thresholds for working through our pandemic comfort levels and idiosyncrasies generally align and after a long while, we decided that since we were all within the same contagion bubble, we should let the littles play together. My little did more socializing on a trampoline in one evening than he had in 14 weeks on zoom. Nearly 100 days is a very long time to stifle the way that you interact with people and it made me realize that as we focus on the risks of Covid-19 – as is appropriate – we need to include a wider threat of risks into the discussion. 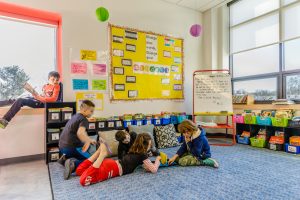 My teenager is also a doer, but his social doing comes mostly through others’ initiatives. Another benefit of our neighborhood at this moment in time is that one of the neighbor teens is a huge initiator and arranged early on for socially distanced, outdoor, teens only, movie nights. I had not realized quite how much of my son’s social interaction relied on school, sports teams and other people pre-pandemic. At 14 in 2020, this does not seem especially surprising or concerning but during the pandemic, he became his own island.

It can be very challenging understanding what is ‘normal’ behavior for a teenager while on lockdown. This is the very age that they are exploring independence and necessarily pulling away from their parents. While he cannot physically distance himself from his us, he has gained independence that would not have been likely pre-pandemic. I have loved watching his creativity and curiosity of cooking develop into impromptu dishes, without recipes, that we have never served him. This interest, which he has carved out, has blossomed in the space that Covid provided. 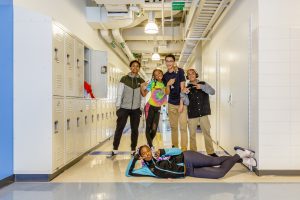 The first few weeks went fairly smoothly, but fissures quickly emerged. There was a big reality check for me as a parent in terms of the impact of isolation on friendships and social connection and the ability of a kid to work independently in a remote school program. This also led to a reckoning of my perception of my child’s developmental stage and the reality in terms of executive function, self-organizing, structuring time, finding things to do, etc.  I have gained a much greater appreciation of what child development means and what it means to scaffold for optimal learning. It is a continuing learning process for me as a parent who has no teacher training or experience.

This time has also amplified realities I was aware of but had not experienced in the same way at home. For example, there was a maker space assignment involving a Rube Goldberg machine that was promptly blown off.  It took a couple weeks for me to get to the bottom of the avoidance. Eventually, I ended up doing the work to get it going. Once it was started, and a framework for exploration was established, D started to plug with a lot of great ideas and participation. It took time for me to recognize the need for scaffolding assistance with brainstorming, testing, making mistakes, and trying again. Positive peer pressure and group interaction were also missing which is where the fun is. We arrived a great result, but it took longer. The process was inflected with more frustration for both me and D than it might have in a school setting. What I have learned first-hand is that my son thrives in an environment where group exploration and discussion are the heart of the learning process. There is a tremendous sense of loss for him day-to-day and for the many community activities and milestone events at school. 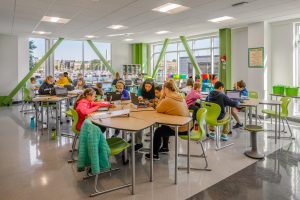 My children attend an extremely hands-on STEAM school – at only 130 kids and less than a decade old, they are emerging from start-up mode and while the school was in many ways ahead of the curve with the technology, I was certainly not prepared to fill the void left when my children were not physically at school. We managed (with great difficulty and at times serious frustration) after a slow start to understand Google classroom and to make sure that assignments were getting completed, Zoom meetings were logged on to and questionnaires answered. But the struggle was real – navigating two children’s schedules in addition to two working parents? One needs a degree in logistics.

The difference in executive functioning between the children was stark. If R sat in our office space to avoid drifting into her own imagination, and with frequent teacher check-ins, she could navigate her way through the day. We did find a need to spend additional time with her on math, a strong focus of the school, to make sure she made headway – and she did. B, on the other hand, required constant check-ins and computer navigation to make sure he stayed on task. We also discovered that while he had the ability to, he had not been pushing his reading. He’s a charmer – and had clearly pulled the wool over the teacher’s eyes. Forcing him to read aloud every day and eventually being sucked into Harry Potter has transformed him into a serious reader – a silver lining to the whole affair.

By the first week in June, however, R and B were done. Cooked. Finished. Tired, defiant and not themselves. Enough Zoom and Google classroom – they wanted the woodshop and the innovation lab to be working with their hands. They wanted to goof off at the lunch table, hang with the middle schoolers, and RUN to be the first outside to claim a rope swing or a space for cut-throat four square. One day we walked by our local school playground (closed of course) and R stopped and took my hand. “Mama, I miss school. When can we go back?” I nearly cried. Very soon, I hope.

During the three long months of distance learning I observed through my 9-year old son the missed opportunities of learning in the spaces in between the classroom.  Not without struggle, we were able to fulfill the daily reading, writing, and math assignments on Zoom and Seesaw, but what we could not replicate at home were the key moments in between learning the “3 R’s” where social and emotional learning happen.  Opportunities for creativity, critical thinking, communication, and collaboration with classmates were absent.  It is at the lunch table where a sandwich crust transforms into a Space X rocket ship; throwing an arm around a friend’s shoulder while walking down the hallway is an unspoken signal that “I’ve got your back”; on the playground a disagreement over who kicked the ball first is an opportunity to learn conflict resolution.  These things did not happen at home, alone, while mom and dad were working.

What did we all see? The missed spaces and moments “in-between.” The opportunities for collaboration and social and emotional growth that come from physical interaction with peers and instructors. We saw children starved for interaction, companionship and hugs from friends. Missed chances to learn from how a friend solves a problem, constructs a sentence, or listens when the teacher is reading. We stumbled our way to the finish line, but the thought of potentially starting the race again in the fall is daunting.