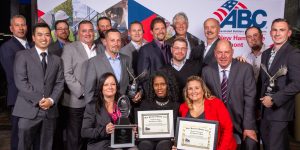 Bedford, NH – The Associated Builders and Contractors (ABC NH/VT) held its 2019 Excellence in Construction Awards ceremony recently at the Doubletree Hotel in Manchester.

PROCON of Manchester was recognized for three of its projects: the Pro Star Aviation hangar in Londonderry; the Assembly Row mixed-use development in Somerville, Mass.; and Rand-Whitney Container in Worcester, Mass. 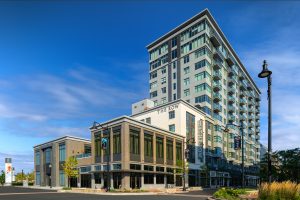 The Assembly Row mixed-use development picked up an Excellence in Construction award in the design-build category. In partnership with national REIT firm, Federal Realty, PROCON designed and built a 315,000sf building composed of The Row 5-star Hotel, 122 luxury residences known as the Alloy, and 22,000sf of retail space.

PROCON Co-President Lance Bennett accepted the award with his project team. “We had a lot of firsts on this project: our first $100 million job, our most complex job ever, and our biggest one to date. It also takes a lot of people to build this type of project.”

The Alloy residences sold-out months before the project’s completion at premium market rates. Moreover, The Row Hotel garnered numerous hospitality industry accolades and was ranked Third Best Hotel in the U.S. and 44th Best Hotel in the World by Travel & Leisure Magazine. 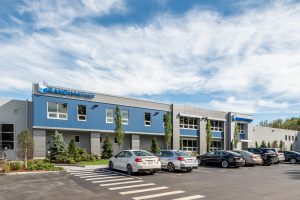 Rand-Whitney won the Excellence in Construction award in the Industrial Manufacturing category. PROCON designed and built a 45,000sf expansion with 22 new docks, a shipping/receiving office area, truck storage areas, a dedicated truck-access driveway, and extra trailer storage. Other renovations included the office headquarters building (built in 1965), as well as adjacent offices across the campus. All of this was achieved with zero productivity loss for Rand-Whitney.

Senior vice president of operations, Dan Messier, explained, “It was a very involved project. We were adjacent to 300,000sf of existing space. We had about 120 tractor-trailers accessing the site daily, as well as paper deliveries by train, and alternate shifts working around the clock. We are pleased that it all turned out extremely well and the owner was very happy with the results.” 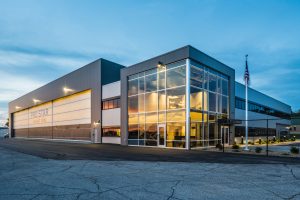 Pro Star Aviation was recognized in the Design-Build category with a Merit award. PROCON designed and constructed a 45,000sf hangar facility adjacent to a busy airport with 1.85 million passengers per year, and 138 flights per day. Working closely with aviation and local authorities, the team safely completed the project with no disruption to flight protocols. The completed hangar facility included a lobby, personnel offices, conference rooms, and an employee cafeteria. It brought Pro Star’s scattered operations team under one roof, doubled the hangar space and increased production capacity.

PROCON was also recognized in the second annual Best Practices category, with a Merit Award for community service and workforce development.