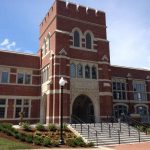 Providence, RI – The Ruane Center for the Humanities at Providence College was among this year’s recipients of an Architectural Precast Association (APA) Award.

Northern Design of Loudon, N.H. provided the precast for the project.

Each year, the APA hosts its Awards for Excellence program, which recognizes excellence in design, manufacturing, and craftsmanship of architectural precast concrete structures and individual components in North America. Over 100 award entries were received for 2014, with only the most prestigious projects being recognized.

The Design & Manufacturing Awards were judged by a jury of architects including Michael H. Kang of Smith Group, Mark Gilliand of Shalom Baranes Architects, and Bill Bonstra of Bonstra Haresign Architects. Here is what the judges had to say about this beautiful masonry project:

“The architectural precast on this project is key to the building’s contextual design. In addition to highlighting the character-defining features of the building, the collegiate Gothic design with its layering of the façade and well-crafted detailing relate it strongly to other buildings on campus carrying a sense of tradition and continuity.”