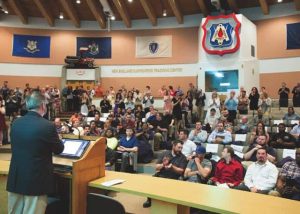 The four-year apprenticeship program, administered by representatives of labor and management, consists of classroom instruction, shop training, and completion of minimum work hours with union contractors and subcontractors.

Five members were recognized with awards given out at the ceremony. Local 424 member Richard Rose (carpentry), Local 94 member Corey Smith (floor covering), and Local 56 member Cristian Clement (pile driving) each received the Golden Hammer Award. This award is given out each year to one member of each of the trades represented in that year’s graduating class. It is awarded to the graduate who has demonstrated outstanding craftsmanship and dedication to the profession.

Local 111 member Jess Vigeant received the Zachary Constant Award, recognizing the graduating apprentice who displays an all-around commitment to the craft, the union, and the community.

Local 2168 member Victor Gonzalez was the recipient of the Alfred Halpern Leadership Award, recognizing the graduate who displays exceptional proficiency and professionalism.

Mark Erlich, executive secretary-treasurer of the New England Regional Council of Carpenters, and Deborah Wright, dean of College of Professional Continuing Education at Wentworth Institute of Technology, were the keynote speakers.