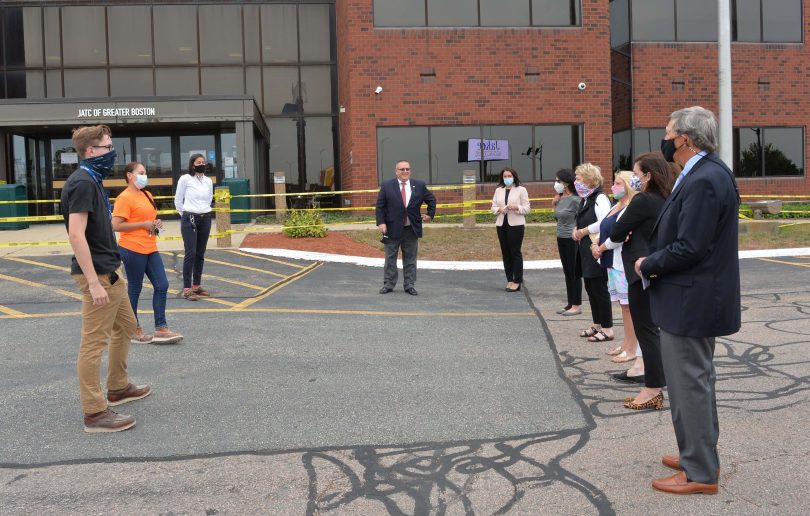 Each scholar was selected on the basis of need and having demonstrated the drive, determination and skill to achieve success in the intensive five-year JATC training program. The $1,000 John A. Penney scholarship for each apprentices is applied to the purchase of books and tools required in the program.

Glayce Loren Miranda-Sena, of Woburn and Yeymi Verde, of Chelsea, were accepted into the five-year JATC apprenticeship program after having been introduced to the electrical trade through the Building Pathways Building Trades Pre-Apprenticeship Program. Both are serving their apprenticeships with NECA Boston Chapter contractor, J&M Brown Company.

The scholarship awards were presented at the JATC Training Center in Dorchester by the late John Penney’s family: his wife, Margaret Penney; his three daughters; Alicia Penney, Donna McKinnon and Gina MacDonald; and members of the John A. Penney Company team, Alan Scharfe, executive VP of the firm who also serves as president of NECA Boston Chapter; and Wendy Zarrella, VP and comptroller, who has been an employee of the company for 40 years.

Scharfe commented, “NECA Boston Chapter, in collaboration with IBEW Local 103 and Greater Boston JATC, is proud to award the John A. Penney Memorial Scholarship to these three dedicated young individuals as they begin Greater Boston’s union electrical training program.  We look forward to their success and are confident their training will hold the promise of bright careers in the industry. The scholarship is a fitting tribute to John Penney, who dedicated his life to the betterment of the electrical industry.”