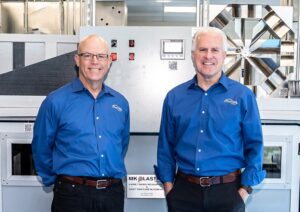 President Emeritus Rich Harper is retiring after 28 years with the company. He joined Flow Tech in 1994 as a sales engineer, and in 1998, purchased the company from the founder, Barry Sroka, adding personnel, equipment lines and a service department. Harper transformed Flow Tech into a go-to source for building owners, design engineers and contractors made up of over 25 employee owners and nearly 20 sustainability-focused product lines, according to representatives of the company.

Tom Proietti, sales engineer of Flow Tech’s Indoor Air Quality lines, Aircuity, SecureAire and Steril-Aire, is preparing for his own retirement at the end of the 2022. Proietti has been with Flow Tech since 2005 and has been an integral part of expanding Flow Tech’s territory of its IAQ equipment and systems throughout New England, according to representatives of the firm.

Derek Labbie also made a career transition this summer. After 11 years as a field service technician and project manager, Labbie now focuses his attention on Service Sales, which consists of helping building owners and facility personnel improve the comfort and safety of their buildings through retrofitting and upgrading equipment.

Joshua Prouser was hired in mid-March as inside sales applications engineer to fill the gap left by Milone’s transition. He provides sales support including pricing, quotations, submittals, interfacing with customers, follow-up and shipping/receiving.

Eric Cormier was hired as sales engineer in late July. Cormier has a decade of HVAC industry experience in a commercial/industrial setting. As a former technician he is well versed in the operations side and says he is looking forward to applying that knowledge into HVAC equipment sales.

Thomas Jedynak joined Flow Tech in late August as electrical service technician. He holds an electrical license and will use it in starting up and servicing ABB’s variable frequency drives. He will continue Flow Tech’s legacy of ABB VFD expertise within the industry.