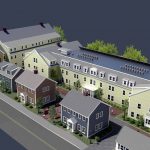 Durham, NH – Construction on 86,000 sf private student housing project is underway and slated to open in the fall of 2015.
The 197-bed project in downtown Durham designed by DeStefano Architects of Portsmouth is a partnership between DeStefano Architects and Orion Student Housing. Other participants in the project include The Dolben Company, who is serving as the owner’s representative, Fulcrum Construction and engineering firms Wozny Barbar Associates and Allen & Major Associates.
Realtors confirm there is a need for more student housing in Durham. Students who are not living in dorms are often forced to live in surrounding towns and commute to classes because of the lack of available off-campus housing.
DeStefano Architects Director of Operations Adam Wagner, with 15 years of experience in the student housing market, spearheaded the project.  He says the planning process in Durham took two years, receiving unanimous approval from all the local land use boards.   Says Wagner, “The greatest challenge of this project was incorporating the amenities that today’s students are looking for within a historic New England village.  The result is a project that compliments traditional architectural style, yet offers the latest in student housing trends and advanced technology integration.”
There are six buildings on the site, located directly on Main Street.  Durham, NH Police Chief Dave Kurz supports the Orion Student Housing project saying well-managed student apartment dwellings are key to a peaceful town:  “This is an appropriate location due to the proximity of other student dwellings, distance away from residential neighborhoods with fewer residents to disturb and in an area of the downtown where late night activity is prevalent.”
Orion says their leasing company began hearing from students interested in renting the units before construction started and they pre-leased the entire facility for the fall 2015 Semester in less than 36 hours.
Privatized student housing is a growing trend.  Developers are capitalizing on the desire of parents and students to find well-managed, clean and secure living quarters.  Observers say one factor involved is the growing percentage of college students who are female.  According to Pew Research Center, there are 13 percent more women than men enrolled in college.
At Orion Student Housing the units are more akin to apartments than dorm rooms, with each bedroom containing a private bath.  The units are fully furnished and share a living room, kitchen and laundry room.  There are granite counters and stainless appliances. There is also 24-hour security.  The technology infrastructure is being provided by Pavlov Media and will be state-of-the-art.
Orion Student Housing is a growing player in the student housing market with holdings in New Hampshire, Maine, Massachusetts, Texas and Indiana.  They currently have more than 3,000 student beds in their portfolio or under development.
Multi-disciplined services from Allen & Major (A&M) include land survey, civil and structural engineering and landscape architectural design. A&M’s principal in charge of the civil engineering and landscape architecture is Robert Clarke, RLA, ASLA, land survey is Kevin Kiernan, PLS and the project’s structural engineer is Paul Kirby, PE.
DeStefano Architects is working on more than a half dozen student housing projects across New England and New York including more privatized student housing and public/ private partnerships with state universities.
DeStefano Architects, located in Portsmouth, New Hampshire, is celebrating its 20th year designing distinctive commercial and residential properties.  The firm has been repeatedly recognized as one of the top architectural firms in New Hampshire and has consistently produced excellent results for national developers of student housing.